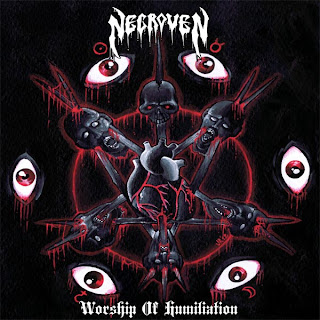 Necroven is a one-man death metal project located in Spain and influenced by bands such as Immolation, Incantation, Gorephobia, Autopsy and other early 90’s American acts as well as Finnish legends Abhorrence and Demigod. “Worship of Humiliation” is Necroven’s debut album, which was recently released on Memento Mori Records following two demos released earlier in the year.

The first thing that hit me when listening to Necroven was the atmosphere; dark, evil, claustrophobic and cavernous. This is not the type of release where I can describe the sound of each individual instrument (although; the guitar tone reminds me a LOT of early Immolation…), as they work together as a unit to create something completely crushing. The music is mostly slow to mid tempo yet occasionally speeds up to blast beats, keeping things interesting. Speaking of interesting; our man J.R. incorporates plenty of creepy melodies in to his song writing, which definitely remind me of the older Finnish acts and which mix in rather well with the old USDM influence.

It’s impossible to choose stand-out tracks, as every song on “Worship of Humiliation” is as good as the one before and after it. It’s a very consistent and very good album.