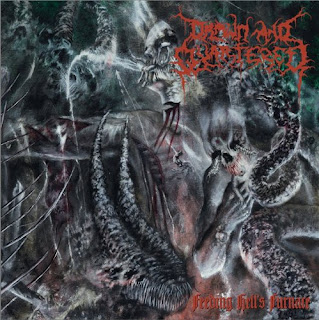 So, not long ago, a friend of mine told me to look up this American death metal band called Drawn and Quartered, whom I’d not previously heard of, although they have been around since 1993. As it turns out, not only is their brand of OSDM up my alley; but they had also put out their sixth album in June, entitled “Feeding Hell’s Furnace” on stellar Greek label Nuclear Winter Records.

The main thing I noticed about this album, is that just by listening to the production and the song-writing, you can really tell that Drawn and Quartered are experienced in the macabre art of old-school death metal and that they have truly been there from the beginning. This is not some silly “comeback album” or something along those lines, this is true death metal darkness. The production is suitably ancient, sounding as if this was recorded in the early days when Drawn and Quartered was a young band.

The vocals are deep and multi-layered, giving extra power, atmosphere and energy to the tracks; in fact, Herb Burke just might be my new favourite USDM vocalist. The guitars on this album are huge and quite possibly the highlight, the atmosphere they build around the drums and vocals is jaw-dropping, as well as the incredibly sick and twisted solos spread throughout songs such as; “Feeding Hell’s Furnace” and “Mutilated Offerings”, to name a couple.

If you’re a fan of old-school USDM, especially the bands; Morbid Angel, Immolation, Incantation and Monstrosity, whom DaQ clearly take most of their influence from, then “Feeding Hell’s Furnace” just might be the best death metal record that you’ll hear this year.