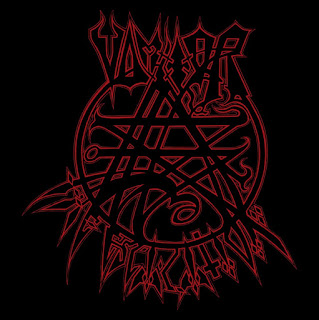 Two years after the release of their second album, Vomitor has unleashed their third full length, entitled “The Escalation”. Those looking for evolution and innovation should stop reading now, Vomitor plays old-school alcohol drenched death metal exclusively. Falses; do not entry.

I'm not going to say much about this album, as this type of music speaks for itself, really. Vomitor’s sound is best described as a mix of early Brazillian death/thrash a la early Sepultura and Sarcófago, “Obsessed by Cruelty” era Sodom, (VERY early) Morbid Angel, early Metallica all drenched in a slathering of old-school Venom and Hellhammer ugliness. These influences combine to produce a familiar yet unique sound.

There’s plenty of muddled feedback and noise in the guitar sound, which adds a dimension of filth to the thrashing riffs and complements Death Dealer’s barking rasps in a strangely satisfying manner.  Also worth mentioning are the killer guitar solos, courtesy of frontman Death Dealer and Portal axe-slinger Horror Illogium, which sound straight out of 1986.

Once again Vomitor has delivered a killer album without changing much at all and still managing not to sound repetitive or boring. Death metal or diiiiiiiiieeeeeeeeeeeee!!!
Posted by Vagabond at 7:21 PM