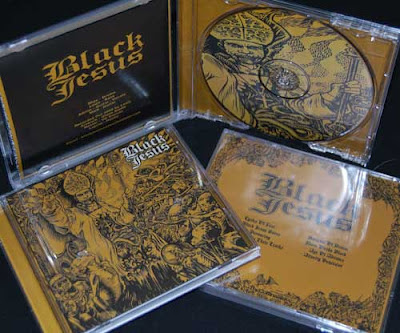 Who’s up for some crusty grinding death metal that sounds like the bastard offspring of Repulsion and early Autopsy? Black Jesus was formed in Melbourne in 2009 and released their only release so far, entitled “Black Jesus Saves” on cassette in 2010. Recently “Black Jesus Saves” has been re-released on CD by New South Wales based label/distro The Coffins Slave.

Musically, you can expect to hear heavily distorted and slightly punkish riffs driven along by mostly mid-to-fast-paced drumming, barely audible bass that pretty much follows the riffs and some of the sickest death metal vocals I’ve heard since Repulsion. The production is damn good for a demo, allowing every instrument barring the bass to shine, although the vocals and guitars are definitely at the forefront of the mix… which suits their sound anyway.

It’s hard to choose a stand-out track on such a consistent release but the main ones which caught my ear upon first listen were the title track, “The Devouring” and “Dead in Their Tracks”. Each song has something to offer and shows immense potential; making this one of the best demos I have heard in a while. There’s not much else to be said about this demo, running at 18 minutes and 44 seconds the band really speak for themselves and if you’re not hooked and keen for more after a couple of listens then there’s not much I can say to sway your opinion.