Terminate - Thirst for the Obscene 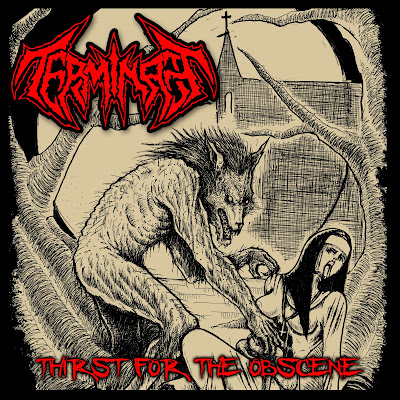 Roughly a year ago I reviewed Terminates first ever demo, which really made the band stand out to me as one of the better new-old-school-death metal bands around from the US. It seems that Chicago is a bit of a hotbed for killer metal; currently boasting these guys and Bones, among others and legendary bands such as Master and Usurper originating from there. “Thirst for the Obscene” picks up exactly where “Demo” left off, bringing you some straight up death metal that reeks of early Entombed, Dismember, Asphyx and Bolt Thrower and luckily for us listeners; this EP runs a bit longer than the cock-teaser of a demo did, featuring four original songs and two covers (Slaughter - Incinerator and Celtic Frost – The Usurper, which are both executed rather well).

The songs on “Thirst…” are, by far, some of the catchiest material I have heard recently. The riffs hammer in your skull and stick around your mind for a while after listening to the songs, the bass pretty much follows the guitar but it compliments the Swedeath “chainsaw” guitar tone used here well enough, the drums are just as much of a draw-card as the riffs; driving the songs along at a good pace and enhancing the catchiness of the songs. The vocals are a sort of lower-ranged Van Drunen; audible and intelligible yet still very death metal. The mix deserves a special mention here as it’s absolutely killer, pushing the guitars and drums right in your face and making them the forefront of Terminates relentless OSDM assault. Pace-wise the songs vary from slower to mid-paced and occasionally all out neck-snapping speed, so there is plenty of variety to be found, and a bit of everything for most death metal fans.

The second track “Numb” is the main stand-out for me, but each song is stellar and will stick in your head for hours. I would certainly recommend looking up “Numb” on YouTube if I haven’t already convinced you that it is well worth preordering “Thirst for the Obscene”. I actually don’t have a single negative thing to say about this EP; every song held my attention all the way through, the production is great for the style and the covers are pulled off really well. Get your hands on this when it comes out next month!