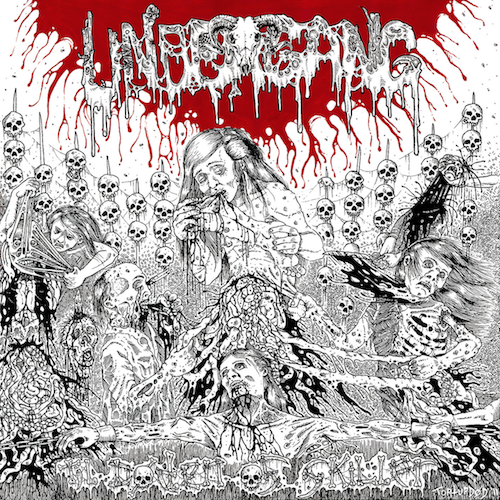 Undergang is a name that started to circulate a couple years ago with the release of ther debut, Indhentet af Døden (translated: Overtaken by Death), a veritable nailbomb of an album that landed somwhere between Swedish death metal and the filthiest moments of Bolt Thrower's discography. They seem to have been steadily growing in stature since then, recently doing a split and euro tour with the colossal Funebrarum.
Til Døden Os Skiller (Til Death Do Us Part) starts off with menacing stop-start tremolo picking that in a bit of a stretch reminds me of the theme from jaws; it certainly evokes the same feeling of impending violence. Then the Undergang we know and love comes crashing down like the hammer of an angry god. Mid-paced, groovy riffage is the calling card of the band, something that is not uncommon in death metal, but I really cannot call Undergang generic. They play not quite fast, not quite slow, lumbering death that, as mentioned above, sounds something like a marriage of Realm of Chaos and Into the Grave. The songs, with one exception, are composed entirely of pounding, agile rhythm guitar riffing underpinned by d-beats. There is not one single guitar solo or lead section anywhere on this album. The band are one massive rhythm section, bludgeoning masterfully for 45-odd minutes. One prominent difference from the debut is a heavy use of samples in between songs- I imagine this would be pretty cool if I spoke Danish. The final twist is the last track, Kadavermarch, an instrumental which features nearly melodic riffs that slowly segway into an acoustic guitar part. Not the most unexpected or innovative way to end an album, but after about 40 minutes the cessation of pummeling makes you realize you've been holding your breath for the entire duration of the album- catharsis.
In addition to the concrete block to the face nature of the songwriting, there is something to be said for the production as well, and that is- FUCK, IT'S HEAVY. Maybe it's just me, but this record seems all together even more punishing than the debut, which is saying something. Overall, I would say that Til Doden will probably take a couple listens to really love on account of the extremely single minded nature of the music, but make no mistake this an awe inspiring display of skull-crushing violence.