Sanguis Imperem – In Glory We March Towards Our Doom

Sanguis Imperem is a 4-piece death metal outfit from California. They’ve been going strong and steady since 2006 having released thus far; a demo, an EP, a split with Nocturnal Blood and finally, in November of 2011, a full length album. 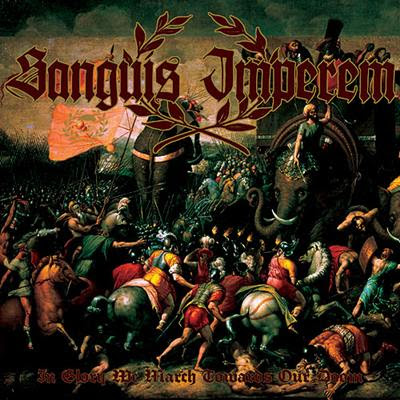 The first thing you’ll notice upon hearing “In Glory…” (after the intro track) is the thick and muddy yet still clear as day production that is pretty heavily focused on the vocals and rhythm guitar parts. The second thing you will notice is that you’re listening to one of the best newer death metal bands out there. Sanguis Imperem bring forth a fierce and ugly sound that mixes the more mid-paced moments of Bolt Thrower’s discography with ferocious early American death metal tenacity and a bit of foul Swedish evilness.

One of the coolest things Sanguis Imperem do, is use multiple vocalists, which already sets them apart from the pack of generic death metal bands over saturating the metal market these days, it also allows for more range in the vocals than your average DM band, naturally. As mentioned before, the production focuses heavily on the rhythm guitars, which allows the crushing riffage to shine through in most songs and get the listeners head banging something fierce. The drums and bass sound a bit murky in the mix, but it only adds a darker element to their sound and I think it works rather well.

The songs themselves are all absolutely killer, ranging from all out blast fests to crushing mid-paced grooves and doomy gloomy passages. So, there’s really something for every type of death metal fan here and not a single complaint to be heard from yours truly.