Intestinal is a 4-piece death metal act from Sweden, formed in 2008. So far they have released a demo and 2 full length albums. “The Rottening” is their latest full length. 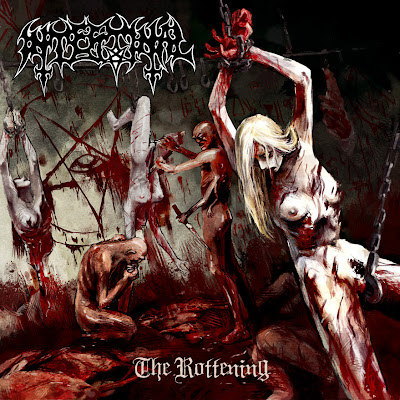 Their sound is pretty straightforward death metal, sounding like a cross between early Autopsy and early Dismember, I’d say, they also lean towards “brutal” death metal at times, but not too often and they stick mostly to OSDM stylings. The production is thick and murky yet still allows you to hear all that’s going on rather well, with the drums and vocals standing out the most. The guitar tone is pretty stock standard as far as DM guitar tones go, but it does the job and the riffs hammer along nicely. Bass follows the guitar and there’s not much to say about it. The real highlight for me is the drumming, which changes a lot during each song and just keeps things interesting (fuck off; I don’t know how to describe drumming properly, but this bloke does a great job!).

The songs are quite varied in terms of tempo and structure, ranging from slower tempos to mid-paced grooves to the occasional all-out speed-fest. Lyrically they tend to focus strictly on gore themes (the typical samples usually associated with gore-themed death metal are there, too), so there’s not too much to say about the lyrics, but they’re good fun and suit the music. There are no real stand-out tracks, as the album flows really well as a whole, even if it is a bit long and drawn out, running for over 40 minutes!

As far as death metal goes, you could do a lot worse than Intestinal, although there is a lot of better DM out there. These guys bring forth some good, solid beef. If you’re not after anything new and just want to bang your head, mosey on over to Hellthrasher Productions (great label!) and buy a copy of this CD. It’s worthy of any deathbangers collection.