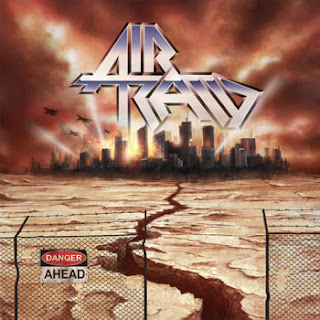 Gothenburg’s Air Raid is one of the few traditional metal bands to catch my attention this year. Back in April, they released their debut EP entitled “Danger Ahead” on Stormspell Records. They also released a full length about two weeks ago, entitled “Night of the Axe”.

Things are instantly kicked into high gear with the opening track “When the Sky Turns Read”, a high-octane, straight forward heavy metal track laden with guitar solos, soaring vocals and galloping riffs that would make Iron Maiden themselves proud. The second track, “Annihilation” is my favourite off this EP, and it is a bit slower than the opener and really takes it’s time, allowing the riffs to really breathe. “The Metal Cult” is full of power and could be considered a heavy metal anthem. “Midnight Burner” is another stand out and it would have sounded right at home on a late 80s Judas Priest album. There are also two tracks from their demo tacked to the end of the EP, which serve as a pretty cool extra.

Although Air Raid hail from Sweden, their sound is very British, incorporating heavy influences from Saxon and Judas Priest, as well as the aforementioned Iron Maiden. These young Swedes have really taken the NWOBHM sound and made it their own.

“Danger Ahead” is well played, well written and well produced, leaving me anxious to get my hands on “Night of the Axe” when I get the chance. Don’t sleep on this if you dig classic, fist pumping, heavy metal in the vein of Saxon, Cloven Hoof, Iron Maiden and Judas Priest.
Posted by Vagabond at 9:31 PM