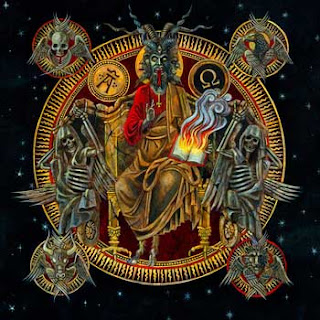 Filipino warmongers Deiphago are back with another filthy onslaught of noisy black metal terror! These guys have been on a role since releasing their first full length in 2006 and producing some of the most truly “extreme” sounding metal that I have heard. “Satan Alpha Omega” continues to tread the path that these Filipino Antichrists embarked on way back in 1989…

The one thing that makes Deiphago stand out from the pack of “war metal” styled bands is their raw and brutal intensity, which puts them on a similar tier to Conqueror, Revenge, Bestial Warlust and Ampütator. The guitars are shrouded in an abrasive wall of noise that totally obscures the riffs, the drums provide extremely chaotic blast beats that are controlled with a certain element of restraint which holds everything together and saves the album from careening off the rails, the bass is much more audible than on previous works, bringing with it a suitably more disgusting atmosphere, Voltaire 666’s vocal work provides some of the most inhuman shrieks and bestial growls that I have ever had the (dis)pleasure of hearing. Deiphago’s music is not for the faint of heart.

While the music is uncomfortable and sounds like it was recorded in a mental institution, there has always been a method to Deiphago’s madness. Sidapa is a classically trained musician and his song structures are rather well thought-out before being buried underneath an uncompromising mound of nihilistic and primordial ugliness.

All in all, “Satan Alpha Omega” is a big improvement over their sophomore album “Filipino Antichrist” (which was a step-down from their debut, in my opinion) and may just be the bands greatest release yet.

War metal enthusiasts will love this album. Everyone else will hate it.
Posted by Vagabond at 6:03 PM