I've probably said this before and I'll say it again a thousand times: the US needs more good power metal. Power metal grew along side thrash in the 80s, the US produced some great gems like Metal Church, Apollo Ra, Attacker, and a slew of other great bands. Anyways, enough of the history lesson, I've got contemporary material today. 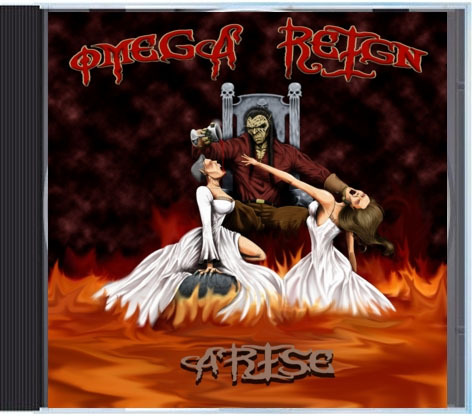 Omega Reign are a US power metal band from Boston, Massachusetts. Forming in 1998, 14 years later they've finally put out a debut, Arise. Perhaps it was worth the wait.

It was hard for me to pinpoint the band's sound, although a lot of it sounds like Thunder Steel-era Riot mixed with a bit of early  Anthrax. The opening song, "Doomsday," thunders across the soundwaves with its heavy and fast riffs. The song is packed with so much energy, the vocals just soar across everything. Things then slow down for the next two songs, "Prison in your eyes" and "This Poem is Goodbye." The former is a mid tempo gallop, reminiscent of something from Riot's Thunder Steel, whilst the latter is more of a heavy ballad. It sort of drops the feeling with the album for me, but it's not a very cheesy ballad at all (Poison couldn't write this good). Things pick back up with the next batch of songs. "Nocturnal" is another mid-tempo rocker with pumping riffs and hooky vocals. There's a really cool downtime section, where everything seems to just space out, then it builds up speed with a shredding solo. The next song is one of my favorites off of this album, "The Way You Lived." The main riff is just huge, and pounds your face like Thor's hammer. It doesn't sound like anything from the 80s but it doesn't sound like a modern metal band either. There's a cool clean part in the middle, with a slow David Gilmour-esque solo, and then it drives back into the dirt and grit. Another ballad, "Bitter," is played but things are quickly saved with "Killer," an all-out grooving headbanger. "Killer" reminds me of the late 70s Judas Priest riffs from Killing Machine, the fucking groove, man! And then to end it with, "Invisible World the Eidolon." It starts off with a slow, heavy gallop and then breaks out into a flurry towards the middle. A good ending bang.

For a self-produced album, the sound is rather good. Everything is mixed well and you can really hear all the instruments clearly. The vocals remind me of a young Joey Belladonna and the guitars would make any 80s power metal band proud. Nothing is too over the top, but neither does the band hold anything back.

Overall, it's a very solid album. Ballads kind of threw me off, I think there should be a limit of one per album (sorry guys!), but the rest of the tracks just kick your ass. So if you're in the mood for some kick-ass USPM like old school Riot, then pick up this little gem!