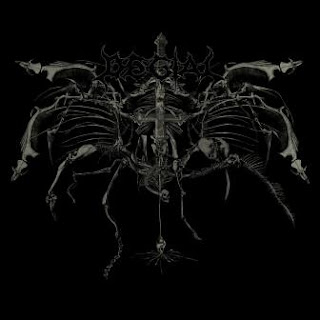 Sweden’s Degial (formally Degial of Embos) have been around since 2004 and released three demos under their old moniker before changing their name and releasing another demo, followed four years later by an EP and now, finally, their debut album, entitled “Death’s Striking Wings” has been unleashed upon mankind…

Some of you reading this will probably think “eh, just another Swedeath band” and move on, but Degial are so much more than that. Sure, they pay tribute to the old masters (Dismember, Treblinka, Merciless, Nihilist, etc. etc.) but their sound is more akin to early Possessed, early Slayer and Morbid Angel’s legendary debut, with a touch of Dissection-esque flair. You’ll find some ripping thrashy riffs alongside pummeling beats and twisted solos, with the occasional melodic hook thrown in for good measure. The raw and primitive production suits the well-thought-out yet demented song writing style of the band, although the vocals do get buried occasionally, which is unfortunate, but not too much of a distraction.

“Death’s Striking Wings” is definitely not the most original record out at the moment, but with songs like; “Death's Striking Wings”, “Black Grave (The Gateway)” and “Swarming”, it will definitely leave a shit-eating grim on even the most jaded death metal fan. It’s not “Seven Churches” or “Altars of Madness”, but it’s as good or better than anything the Morbid Ones have released since, and that’s good enough for me.

Degial’s debut is a fine addition to my collection that fits in well alongside my Tribulation, Repugnant, Angelcorpse and Cemetery Urn albums.
Posted by Vagabond at 4:51 PM