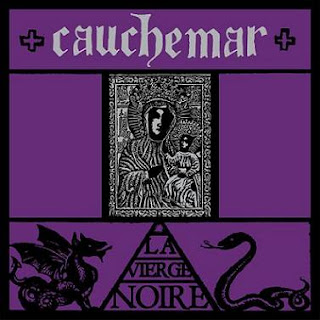 CAUCHEMAR, which means “nightmare” in French – is a trio hailing from the dark depths of Canada performing traditional-styled Doom with some heavy metal influences. Their sound is rather fresh with a dynamic edge and you can definitely hear the intention of the band was not to imitate their influences. For me, it's pretty hard to make comparisons, because I feel that CAUCHEMAR has their own thing going here, and as mentioned before, it all sounds very fresh.

“La Vierge Noire” contains five tracks that clocks at about 21 minutes in total. The first track, ‘Le Voile D’Isis’ opens up this EP in fine style with a thrashing riff that will get your feet tapping in no time. This is definitely one of the absolute stand-out tracks here and a great song for an introduction. There’s a lot of emotion on display here, with a rich melody and epic atmosphere. The band is more than able to conjure up a very mystic-like atmosphere that gives the music its rich character. The vocals of Annick Giroux, sung in French, come off as very powerful. Her performance is top-notch and a definite stand-out in the mix.

I read somewhere where it stated that, anyone is able to create Sabbath-inspired Doom nowadays and correct enough (and which REAL Doom bands don't take inspiration from the mighty godfathers?) – but on the other hand, FEW bands are able to come up with something as innovative and emotive such as what CAUCHEMAR has done here. Now I’m not giving the full praise here, just stating that whatever they are doing, they’re doing right, and should continue doing!

Now there’s no denying that CAUCHEMAR is a “revival” band, and so what? Revival bands are NEEDED in order to pave the way for future acts and to push the genre forward – but it's always a matter of whether or not the band is able to pull it off properly, and here, in this case, CAUCHEMAR has done well. I think the foundation of the band’s sound owes a lot to bands such as WITCHFINDER GENERAL, CIRITH UNGOL, BLACK SABBATH, PENTAGRAM, etc – you get the idea – basically, the whole proto-metal and 80’s Doom movement. There’s a definite 70’s tone prominent here, which is, of course, a good thing.

“La Vierge Noire” is a competent display of well-executed epic Doom that will find itself appealing to traditionalists and fans of the riff. A good, solid EP.