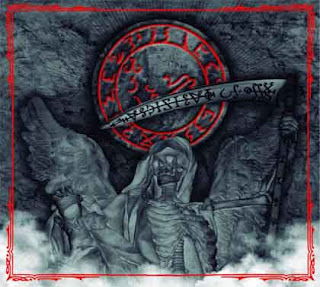 The Brazilian death coven aptly branded VOBISCUM INFERNI unleash their second full length offering entitled " For The Greatness of His Kingdon of Fire And Blood " - and once more rips gashes across the wrists of every christian with an album absolutely heaving with evilness.

The sound hasn't changed too much since their former output; a mid-tempo beat that strongly dominates throughout this malignant pest, accompanied by hellish guitar sounds that portray an extremely bleak, hollowed feeling.

The riffs are comprised of truly unholy, dark tones, yet far from sounding unoriginal or monotonous. The guitars induce quite a viscous atmosphere, with a stench of pure death, at times reminding me a bit of SARGEIST. There's no doubt that the music contains an otherworldly feel and aspires to evoke some form of feeling within the listener.

I feel the need to praise the vocals too - rugged and harsh, raw and demonic - screams directly from the abyss. Diablorum (the vocalist) is a demon straight from hell. The drums are brilliantly executed, always maintaining a mid-pace, and complimenting the atmosphere perfectly. The music presented here is as black as it comes, and shows no probability of going "soft". This album may only contain a mere eight tracks, two being the intro and the outro. The songs are rather lengthy - with the longest being seven and a half minutes. Comparable to other Brazilian acts such as VULTURINE and BLACK ACHEMOTH. I would recommend this band strictly to the most die hard black metal maniacs.