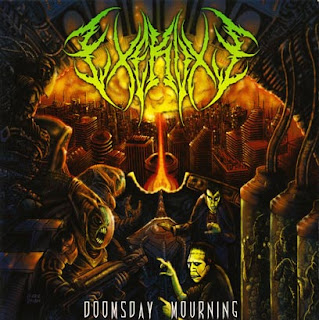 
EXEKUTE is a Sydney-based five-piece delivering the goods with their debut EP titled, “Doomsday Mourning”. It is rather evident upon first listen where the guys in EXEKUTE derive their influences from; giving nods to bands like CANNIBAL CORPSE, SUFFOCATION and MALEVOLENT CREATION. The band is indeed all about spewing forth fierce and ultra-heavy Death Metal you can actually head bang to.

The sound is pretty good overall, with an excellent mastering job courtesy of James Murphy – a name I believe familiar to everyone reading this. The EP starts off with the killer instrumental track, ‘Doomsday Mourning’  before the second track, ‘H.A.A.R.P’ launches forth with brute force, smashing and obliterating everything in its sight.

EXEKUTE’s brand of old school Death Metal is rather enjoyable, maintaining a mid-tempo pace for the most part, but flirts with some faster parts hither and thither. The musicianship is reasonably good, with credit going out to the drummer for providing some kickass drum fills, keeping things interesting. The production on the percussion is really clear, and you are easily able to hear every single beat cut through in the mix. The guitarists have done a good job at keeping the rhythm tight and heavy at all times. The vocals are deep and fierce, yet not with the typical “cookie-monster” growls, but rather more in the Craig Pillard-type range with bits of George Fisher.  There’s a total of four tracks featured here, with a running time that clocks at fourteen minutes.

Like a hammer blow to the face, this shit is loud and furious and liable to beat you into submission. With "Doomsday  Mourning" the band shows much promise, but I do feel that there is still room for improvement, and perhaps even “progression" in terms of finding their own identity. "Doomsday Mourning" is a short and 'to-the-point' EP, and can be seen as a teaser of what to be expected from the band in the future.