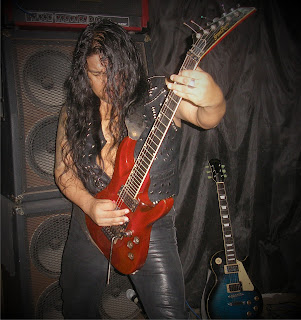 1. Bestial fucking hails Moises!!! For those who do not know much about your band, please give us a brief summary of the past and what your musical influences were from the start.

Infernal greetings my friend
Hell Torment is a band from Peru south America it formed in December 2006 of Total fucking death, thrash Metal , have a demo tape called "I Invoke Thee" a full length by Crush Until Madness Records, 2 Ep vinyl by Iron Bonehead Records and a split in format tape by Devil Blood Records From France a split format CD with Abigail from Japon and Adokshiny and a MCD Called "Cursed Nazarene" 2013 Hell Torment this formed by a only single person which recorded all the instruments and voices, and major influences are Venom, Celtic Frost, Destruction, Sodom, Kreator, Sarcofago, Sepultura Old, Vulcano and many bands of the decade of the 80s and early 90s.

There are very good bands from my country brother some with many years of formed, and many concerts in the scene underground of my country as Anal Vomit which has played in many countries in South America, the underground scene in my country is very small but very strong! There are also some important labels and too zines only I hope that the underground scene in my country can grow only time will tell.
I can tell you about a new band that I formed currently in June 2013 called "Impaled Christ" from total fucking war Metal total destruction the first week of July 2013 will release a promotional demo of two tracks and we are working to release in late July a demo tape with 5 tracks.


3. The music from HELL TORMENT is primitive and bestial. What opted you to play in this vein as opposed to having a polished sound like many modern bands? What is it about the primitive hell noise that gets you fired up?

The influences that I have always liked is the sound primitive and bestial I do not like the polished sound it sucks although it should be noted that in the different releases of Hell Torment I was able to combine different musical rhythms but I never leave of have a sound raw, this is why I hate some bands, by have a sound as polished but each band chooses its future. but the second album Hell Torment will be a complete madness will return to sound dirty and sick as my new project Impaled Christ band.

4. As far as I know, you play all the instruments; is this a difficult process? Why not collaborate with other musicians … or is the vision of HELL TORMENT too personal to share its ideas?

Exactly my friend I play all the instruments and voices, and as you say it is a really difficult process takes a long time and sometimes becomes stressful but when you have the final result is very rewarding, in my country is very difficult to find a good drummer or guitar
I always played guitar but as I could not find a drummer I had to learn to play this instrument my last band was “Eternam” death metal great band but disintegrated in late 2005 Hell Torment is a very personal band but it should be noted that anyhow this year we will be playing live and I'll meet musicians only for presentations.
5. Let’s go back to your debut album that was unleashed upon this rotting world in 2008 … What are your feelings now regarding this devil seed and what was the response like at the time? How did you end up sealing a pact with CRUSH UNTIL MADNESS? Any idea whether the label is still spreading its propaganda or not?

The first album brought me a great satisfaction my friend At That time was very difficult for me because I was learning to play drums and that's why the tracks are simple but with a lot of energy proposing Total chaos, now I feel satisfied with the first production was a very good time in Hell Torment and the response of people was very good, I met Marie Horval, from Crush Until Madness recrods by a friend who communicated with her and chatted sent him the demo tape she likes and she became interested in producing the first album at present the label does not exist so I have understood, but hopefully soon may arise from the ashes. 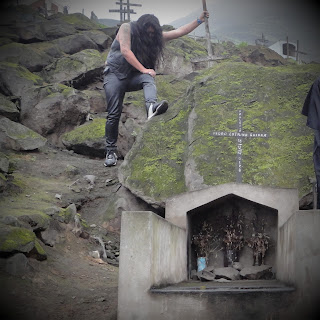 6. A lot of your lyrics are written in English, but a lot of other South American bands seem to feel more at ease expressing themselves in their native tongue … Why did you opt to write mostly in English?

The songs are written in English because I can sing better, in Spanish I did not feel very good when I sing and also because many people in the abroad could know what one this expressing.

7. The cover for “Opening the Gates of Hell” was rather simplistic (just like the music), with no artwork – just the logo and title in red … I think it was the perfect decision since it pretty much sums up what the band is all about; straight-forward, no frills Black/Death that is the musical equivalent of Christ being raped in his own blood…Your thoughts?

Exact brother, the cover was just the logo, I wanted to express that music was something simple but direct to the bones all the lyrics about the worship to Satan, lust, and perversion clear and direct.
8. Moises, which releases or bands have you been particularly fond of listening to lately? There are many killer bands present in the underground today, maybe there are a few bands who have captured your attention in the last few years?

There are many killer bands, stunning in the underground as Necroblood from France, Ouroboros from Canada, and also bands like Sadomator, Black Witchery, Morbosidad, Obeisance, Deiphago and many more.

9. The following is the not a question I use regularly, yet I notice that you hold your six string axe in almost every picture I’ve seen of you, so perhaps you could describe some of the equipment you jam with …

Always play the guitar from the decade of the 80... I have a guitar GrassRoots, and a washburn series Chicago I too have a small rehearsal room where I have Marshall head, Carlsbro head, cabinets Marshall 1960 for the Guitar and Gallien Krueger head of bass and a Pearl drum kit and some equipment more from recording. 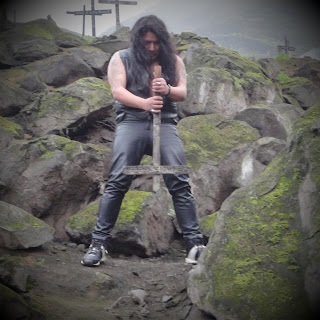 10. The moniker HELL TORMENT is fairly ‘to-the-point’ and therefore it should be obvious what can be expected lyrically. What motivated you to settle with this name? How does it link to the message that you convey with your music?

Initially I sought an appropriate name for my band, but I search a name that expresses what I think ideologically, was hard to find a name but at last I found and Hell Torment expresses, what I think: Total hatred for Christians by spread something that does not exist in my concept that is the belief in a god called Christ, about Christ who died and rose again this is a big lie, and in my lyrics speak about the lies of a god that does not exist! Fuck off all Christians poor wretches.
And basing on this way of thinking is that I think to put the name of Hell Torment but also tried some different concepts of my life.

11. What is your stance on bands who wear spikes, bullets-belts and leather, but seem to apply a “fun” image to their music? Does this go hand in hand? Or do you think humour can not be brought in context with extreme metal?

Each band does the best he sees fit, if they feel they must use spikes, bullets-belts I think it's okay, I have 41 years and I grew up looking the zines the classic positions of the bands primarily as Venom a great band of total worship of which I am a total fan, but the spikes, bullets-belts is the position of music that is Total War the final holocaust, with a sound raw, rotten of torment for all Christians!

In the first week of July 2013 will be released a production called Hell Terror which contains 9 tracks 2 tracks exclusively for this production and the others tracks of this productions are of the 2 ep released by Iron Bonehead and 1 Track of a split tape release by the Devil blood productions from France.
Right now I'm working on the news songs from Hell Torment for the second album which will be a raw sound and complete chaos something like my other band that I have been called Impaled Christ.

13. Thanks a lot for your time, Moises. I hope this interview will in some way help spread your message of hate across this world … Is there anything else you would like to add?

Thanks to you my friend for the support and tell all the maniacs of Hell Torment Total gratitude for the support and tell that Christ is a total lie and fuck off all the Christians, and the only thing real in this world is death.
any contact write to:
https://www.facebook.com/helltorment
moises-jo@hotmail.com or
helltorment.peru@gmail.com
address:
Moises Dextre Avila
Joses balta 148 segundo piso
urbanizacion ingenieria
lima - 31
Peru 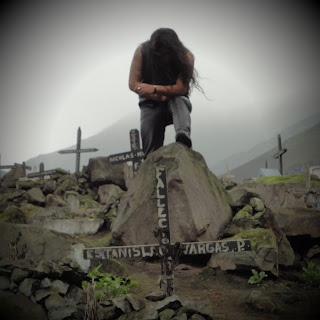