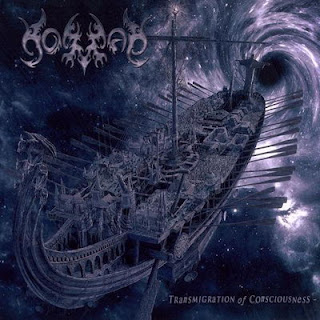 Ever heard of NOMAD? "Transmigration of Consciousness" is the fifth, full length and latest output by the Polish deathsters, and as a result, some of their most accomplished work to date. To a certain degree one can compare NOMAD to it's omnipotent country-men, BEHEMOTH (and rightly so, seeing as they share a guitarist) - but definitely on a different kind of scale. For instance, where BEHEMOTH has themes pointing towards the occult, NOMAD takes more of an individualistic stance on the matter.

"Transmigration of Consciousness" is greatly more atmospheric than it's predecessor. I believe the band visualized an album that would crush the listener with hypnotic rhythms, which are harsh, yet dynamic in it's variation. The interludes between tracks tie the songs together brilliantly and tend to evoke an obscure ambiance, which takes the climax of the atmosphere to devastating and effective levels. I suppose one easily categorizes NOMAD as a modern Death Metal band, yet there is so much more depth to NOMAD's brand of crushing Death Metal that puts them on a level of superiority compared to some of their peers.

Believe me when I say that it is no easy task to summarize the sound of this particular album, since I believe its aims are to break ground and stand above it's peers. Innovation is the name of the game here.

"Transmigration of Consciousness" is an album full of surprises and rewards the listener with repeated listening. There are no "singles" found here, as the songs flow together as one piece (hence the interludes between tracks). This is one of those albums that require you to listen from start to end to be engrossed in it's offering, a mood piece, so to speak.

If you enjoy the works of other Polish Death Metal bands such as AZARATH and VADER - or generally enjoy extreme metal that leans a bit towards the experimental side, then there's no reason you wouldn't enjoy of what's on offer here.