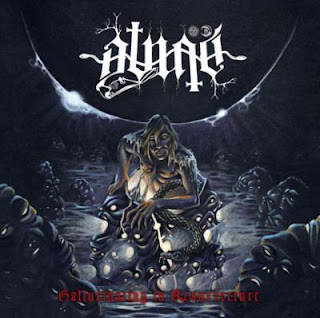 When looking into the past, there’s absolutely no doubt that the United Kingdom has given birth to some of the very best Death Metal acts the genre has to offer – despite the fact that there weren’t as many death metal bands from the UK back then– they certainly made up for it with some of the finest, most widely regarded classics in the fathomless realms of Death Metal (quality over quantity). I feel obligated to mention, out of my humble opinion, that the UK has had a rather average Death Metal scene (even less for Black Metal) since its glorious heyday, with not much exciting bands popping up, whereas lately, it seems that things have improved vastly (and continue to) in the last ten years or so.  Great and exciting bands have turned up, who seemed to have spawned themselves from absolute nothingness, only to deliver an (un)healthy dose of morbid metal mayhem with the sadistic intention of thumping a hammer to your faggot face. Indeed, bands like CRUCIAMENTUM, ADORIOR, GRAVE MIASMA, LVCIFYRE, EVOKE, VALLENFYRE, ABYSSAL, SPEARHEAD, DIAMANTHIAN – all deliver what I can proudly call: DEATH METAL – and it fucking owns. Along comes BINAH …

BINAH storms forth from the deepest abyss and delivers an unholy slap of absolute dense, filthy, skin-crawling DEATH fucking METAL to make the nuns bleed from their assholes once more.
“Hallucinating In Resurrecture” is their debut opus and a finely crafted piece of morbid, Occult Metal. An aural sphere to the infinite realms of madness.

Speaking of the music; BINAH manage to come up with a sound that’s both fresh and conventional – and not a bad thing at all. There’s a definite (and very obvious) Swe-death influence concerning the axe-tone, which is ultra-heavy, distorted and rhythmically crushing. Concerning the above mentioned underlying element, it does not mean to say that BINAH is another retro Swe-death worship band, NO – “Hallucinating in Resurrecture” is more of a fusion between some good old murky Fin-Death, Incantation-like density, and the predominantly old era of Swedish Death Metal, all packed in one.

The album is introduced with the awesome ‘Into the Psychomantrum’ – a hellbending, haunting intro that brings to mind old horror movie soundtracks, especially from the Argento variety. ‘Morbid Obumbration’ is a seven minute + psycho-train into the hellish caves of darkness where all dreaded things await. The song takes about two minutes to kick itself into gear with a mammoth and skull-bludgeoning build-up riff. The solos throughout the album are, for the most part, fairly short and concise, but still pretty stellar. They definitely make their appearance at the right moment. The vocalist utilizes a type of mid-range growl that’s akin to that of Mors Dalos Ra, and most certainly worth a mention.

“Hallucinating in Resurrecture” puts a strong emphasis on atmosphere due to the massively-layered guitar tone, and as a result, resonates a very dark mood that will captivate and raise the hair on the back of your neck. Despite the music being relatively atmospheric; it doesn’t quite operate in the same manner as bands like PORTAL or ABYSSAL – with the two aformentioned bands, a big part of their fundamental essence is focused greatly on creating a hypnotic ambiance (atmospheric Death Metal, anyone?).

The cool thing about BINAH is that they display a great deal of technical capacity without sounding like a total wankfest. Deep, monstrous and demonic growls, dirge-like buzzsaw riffs and curvy, but well-executed guitar solos, are but few of the many, or ‘basic’ elements the listener will tread upon. I’ll say this though: if I was to choose only one stand-out element from BINAH’s music that I felt would define their sound, then I would say it’s their flawless ability to craft an atmosphere drenched in horrifying evil and the absolute cacophonous hell it manages to hassle upon the listener. In some sense, BINAH can almost be described as: GRAVE (first two albums) meets NECROS CHRISTOS. At least it does so for me. Most of the songs are of a lengthy variety –with a few notable exceptions such as ‘Absorption into the Unearthly’ clocking at a mere 3:09 – a short and furious beater that pummels you headfirst into the dirt.

Initially, I will recommend this to anyone into bands such as AUTOPSY, IGNIVOMOUS to DEMONICAL and SONNE ADAM. This is killer Death Metal the way it should be played. No fancy bullshit.
Expect nothing less than a warped and turbulent attack on the senses by the morbid auditory that is “Hallucinating in Resurrecture” which fervently promotes darkness, death and decay… Enter the temple of BINAH at own risk.