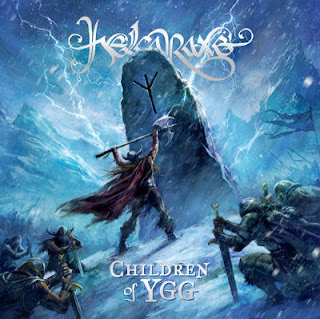 Hailing from New Jersey; HELCARAXE has been spewing forth their brand of Viking Death Metal since the year 2003 –and seem to have built up a reputable name for themselves in the underground during the last couple of years. I said “Viking” and indeed –but don’t think for a second that this is in the same league as Amon Amarth –a band, who might as well be endorsed by Coca Cola or play concerts at Disney Land – rather; HELCARAXE draw its influences from the early 90’s Death Metal movement and refine it into a sound they can safely call their own. As an obvious reference point; I would say a very prominent UNLEASHED influence comes to the surface ... And rightly so; since they are long-time pioneers in the realms of viking metal, and HELCARAXE to carry forth the flag for this particular style. But don’t get me wrong, at the end of the day, its still pretty much just DEATH METAL, and fancy genre categorizations become irrelevant; it’s only coined as “Viking” when speaking about the band’s particular lyrical theme.

The songs are superbly constructed, with riffs pacing along at crunchy ease, always maintaining a fresh and interesting tone; catchy and majestic hooks, and the occasional epic lead melody to make your heart explode. There’s a definite majestic feeling in the guitar playing, and the reason why the music is able to leave such a memorable impression. There’s a repeated usage of catchy, groove-laden passages (which are prominently executed), as well as some heavier, more darker-sounding riffs. Jesse Traynor, the vocalist, delivers an abrasive, sort of low-end growl, with some high screams added for range and good measure. Overall, they are very well executed, and the type of vocals I like to hear in my death metal. Occasionally, some epic backing vocals make itself present, adding some multiplicity to the atmosphere and keeping things interesting for the listener.

The musicianship has been honed to a tee, and when they shred, they shred hard. These guys know all about how to write splendid and memorable compositions without losing track of the genre’s essence. They manage to balance melody and brutality in such a fresh manner, and add to that some striking technique. While the music is intriguingly catchy, I wouldn’t quite call this ‘melodic death metal’ compared to today’s standards…think EUCHARIST or KALMAH (a bit more brutal, though), and you might just get a good idea of what to expect. The produced sound is very strong and clear without sounding too plastic and ostentatious; thus making the instruments heard more prominently – even the demo tracks are well recorded, but with a slightly more crispy sound.

An interesting verity regarding “Children of YGG” is that it comes off sounding like an album, but it’s actually a compilation featuring some re-recorded demo tracks and a few new songs composed in 2011. It’s a definite treat, and surprisingly addictive. I don’t have anything negative to say about it, and I’m being truthfully honest. By now, I’ve listened to it a few times, and gets better with each listen. “Children of YGG” have convinced me to dig up the band’s back catalogue which consist of numerous releases, including three full length albums…All in all, this is nothing but straight-up, old school Death Metal to the core, and should have no trouble at all appealing to fans of bands such as OBITUARY, MORBID ANGEL, GRAVE, UNLEASHED, EUCHARIST and the like… The compilation in question was released under PROMETHEAN BURN, and came with a very neatly designed layout, including lyrics and a magnificent, epic artwork done by Alan Lathwell. “Children of YGG” is excellent compilation of strong material and well worth investigating, especially for those new to the band.

Written by James Goatfukk
Posted by Vagabond at 12:51 AM