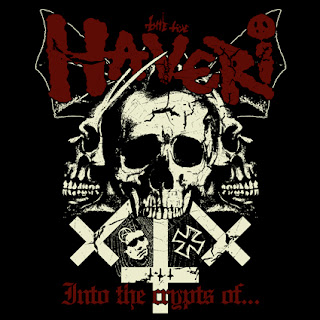 Sweden: most certainly not unfamiliar territory when it comes to punk and death metal, so place in your mind a band from this country, one who derives their inspiration from both sides of the same stained coin and melts it into something refined, a result which reveals some of the finest metal-punk-hybrids in over a decade. HAVERI, can easily be considered to be one of the last truly great bands of its style, to grace our tormented ears.

HAVERI unleash a sonic barrage of D-beat violence and chainsaw-tinged guitar riffs best described as: "music that will mangle your mind" -a quotation coming directly from the band. The music does indeed have a strong AMEBIX influence; perhaps even more so regarding the vocals, which are akin to torturous and hellish screams that eerily float down from the darkened windows of an abandoned asyllum that'll raise the hair on the back of your neck...sounds of pure wickedness, as a man about to die. The overall quality of the music is rather superb, with a production job that's both filthy and equally comprehensible. The atmosphere evokes the same cold, dark and rancid feelings of the first and second wave of black metal bands.


To a certain degree, I am rather disappointed, firstly, for the reason that this particular band is not too well known among maniacs, and secondly, they are currently split-up...which is quite a pity, because in my opinion, further albums by these lads would've been killer. One fact remains prominent, that they, at the least, put forth one spectacular debut album, which in my honest opinion is most likely to stand the test of time - and that's saying a lot.