Blasphemophagher - …For Chaos, Obscurity and Desolation… 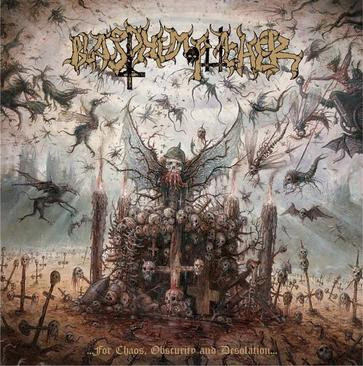 Blasphemophagher are an Italian-based 3-piece unit specializing in intense bestial warfare with touches of grindcore and thrash metal. These guys are one of the most intense metal bands I’ve ever heard and are definitely NOT for wimps and posers!

This squad of wild nuclear warmongers have been around since 2002 and have put out a VERY respectable catalogue of splits, demos, an EP and a full length. As well as two recently released compilations. “…For Chaos, Obscurity and Desolation…” is their second full length, released in January of 2010.

There are so many elements going into this barbaric assault it’s almost ridiculous! Upon listening, I can hear elements of Bathory, Blasphemy, Bestial Warlust, Napalm Death, and Repulsion, as well as thrash metal influences in some of the riffs. This is a beast that doesn’t know how to play nice!

After a short intro, “Descending into Extermination” kicks you in the gut and throws you across the room with it’s warlike fury. Sick vocals that reek of old-school grinding death metal, badass riffs that don’t let you catch your breath as you bang your head like a maniac, fast as hell drumming that drives things along at fleshripping speeds are what’s on offer here, and it’s the same with every track! This is one release that constantly pummels you until there is nothing left to pummel.

This is a very consistent release (as is everything they’ve put out) that will not disappoint the listener. Unholy, brutal (I usually try to refrain from using that word, but it definitely fits these guys), fast, aggressive, evil and drunk as hell are words I would use to describe the sound.

If you can enjoy one song on here, then you’ll enjoy the rest of the album, so skip on over to youtube and check out one of the tracks. While not the most varied album out there, it doesn’t need to be. Why would one bother trying to expand their musical soundscape when they don’t have to? These guys know what they want to achieve with their sound, and they do it damn well. Every song is stellar, they stand out from the crowd of generic “black/death” metal bands out there and do their own thing their own fuckin’ way.

I’m not going to pick a stand-out track, because I don’t want to, and neither do I find it necessary on a release such as this.

This style of music is not for the weak. If you are a false do not entry.

the problem of this band is this:
the singer and the drummer got a relationship...how you can play warmetal and be gay?

i was at NWN fest and they was Blasphemy's serves haha.
don't like this kind of warmetal.