I love the feeling when I get my hands on a new band’s debut demo. Nothing can describe the excitement of finding some undiscovered band while they’re still in the early stages of their career. 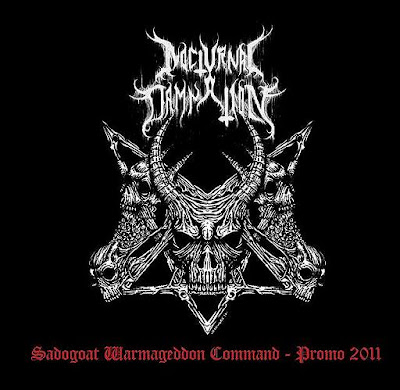 Nocturnal Damnation are a 2-piece black/death “war” metal band from South Korea with a sound that can be likened to bands such as Proclamation, Archgoat, Sadistik Exekution, Nuclear Desecration and of course, the mighty Blasphemy!

The 3-track CD starts off with some no bullshit bestial chaos with the song “Satanic War Metal”. The first thing you notice is the vocals, which are deep and sound as if a demon from Hell itself has taken over the microphone. The instruments themselves actually seem to meld together and assault your ears as a single entity, although special mention must be made to the guitar, as it sounds great and sticks out a bit in the mix.

“The Almighty Sathanas” begins with a siren going off in the background before a chugging aggressive riff assaults your ears like a gattling gun blast. This song is pure brutality and evil thrown in your face. I’d go as far to say this was my favourite off the demo.

The third and final track “Apocalyptic Nuclear War” once again starts off fast and furious. This is the most varied song on this release, in my opinion. A great way to finish things off and leave you hungry for more!