Children of Technology – It’s Time to Face the Doomsday 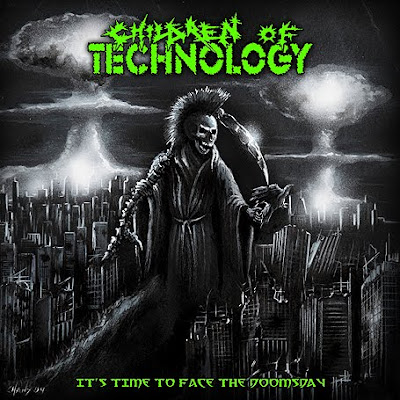 Children of Technology are a 4-piece from Italy who refer to their music as “Motorcharged speed-crust”. They look like they stepped straight out of a “Mad Max” film and sound like a crust punk band who have been on a massive thrash metal bender. Oh and they forgot that it’s not 1987 anymore!

The obvious influences here are Motorhead and Discharge, hence the “Motorcharged speed-crust” thing they have going on. There’s also a few other influences that stick out, such as Toxic Holocaust, The Exploited and Barbatos as well as the usual crust suspects (Doom, Wolfbrigade, basically anything catchy as the clap that contains d-beats) then chuck in some old-school thrash such as Onslaught, the first Bathory album, Razor, early Voivod and a very healthy dose of early Venom. So, if you’re looking for something fresh and original, do not entry.

So what to expect sound-wise? How about; Lemmy-esque gravel throated vocals, catchy as hell bluesy yet chugging riffs complemented by the crunchy yet twangy guitar tone, the occasional thrash break, intense gang vocals, audible bass and competent drumming? Does that sound like your cup of tea, or should I say your bottle of beer?

My personal favourites on this release are “Racing through the Valley of Death”, “No Fuel…No Hope!!!” and “Escape from the Danger Zone”, although every song has its moments and I can’t say anything bad about a single track.

So to sum it up, if you like your metal and your punk filled to the brim with catchiness and attitude, go on over to Hells Headbangers and order “It’s Time to Face the Doomsday” right now!

Is that a Carnivore reference? Man, rad.

Not sure mate, but the female in the band wears a Carnivore back patch so it wouldn't suprise me.