Recently, I reviewed the debut demo by Nexwomb, a “Ross Bay” style black/death metal band from Portland, USA. “Infernal Warbeasts of the Necrotorium” is their second release, a split 7” with Gorphyryac, a young band from California who play black/thrash metal heavily influenced by Bestial Warlust and the like. 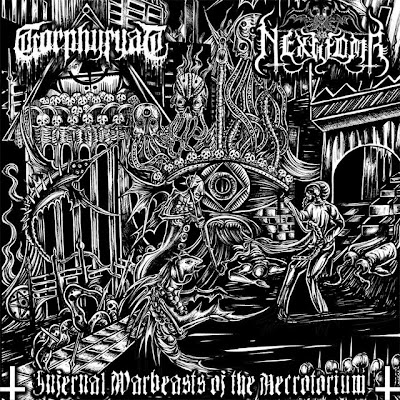 Gorphyryac’s side of the split features two tracks of blistering shark bastard warfare. Imagine if the members of Bestial Warlust decided to get hammered and play thrash. I don’t think I could choose one track over the other here as they’re both very similar in style and complement each other well. Looking forward to hearing more from these boys.

Raw batshit fast angry metal is what Gorphyryac does and they do it well. 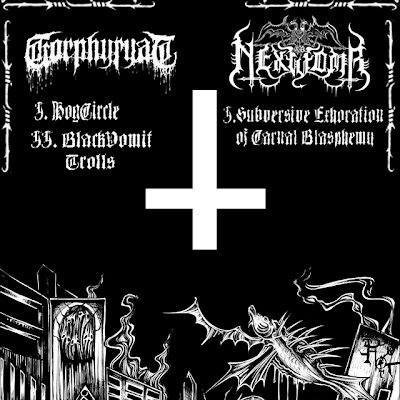 Those of you who read my recent review of “Militant Heretic Aggression” would know that Nexwomb worship at the altar of Blasphemy. The track on offer here “Subversive Exhortation of Carnal Blasphemy” isn’t much different, stylistically speaking, from what’s on the demo. What you do notice, however, is the band has improved quite a bit as musicians since the demo.

The song begins with a bit of a blasting intro, leading into some slower riffing that gives off a very dark vibe, then leading back into more blasts! This all builds up to an epic slower/mid-paced section starting at around the 2.30 mark which carries on for most of this nearly 6 minute track.

All in all this is a great song. I hope Nexwomb continue to make excellent material such as this.

A great split, both sides are stellar and I wish the best of luck to these two up and coming bands!
Posted by Vagabond at 10:26 PM