Terra Australis – Slave to the Moon-Shadow 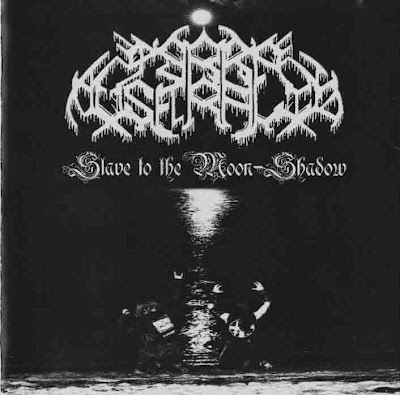 Terra Australis are a two-piece black metal outfit hailing from Melbourne, Australia. They’re a fairly new band, having only formed in 2008, but so far, they’ve put out 4 demos, a compilation and two full length albums. “Slave to the Moon-shadow” is their second full length, released in the December of 2010.

Most of the album is your standard 90’s black metal but mixed up with synths (non-gay synths, mind you!) and aforementioned odd bits of ambience. One of the highlights would have to be the song “Satan’s Soldiers Elite”, which I actually didn’t like very much at first but after a few listens has grown to be my favourite track off the album. The weird “chorus” is what threw me off, but after repeated listening it “clicked” in my mind and fits the song just as well as the kick-arse guitar solo near the end. The other stand-out song here is the epic "Black Candles Black Wine", trust me here, this song is just killer!

I’ve not much else to say about this album, except that it is definitely a grower, with my personal favourite song being a perfect example of what I mean. I have to point out, though; I don’t usually listen to this style of black metal, but this release has been getting regular play on my stereo recently.

4/5 Give it a chance, if it doesn’t stick with you at first, give it a few more listens. I’m looking forward to hearing where these guys take their music on future releases.

EDIT: Being the tired half-asleep fuck stick that I am, I forgot to mention what I consider to be the climax of "Slave to the Moon-Shadow"! The seventh track, entitled "Pledge Allegiance "Submit To Satan"" is the absolute peak of this album. At 8 minutes and 32 seconds long, I have no idea how I forgot to mention this in the main part of the review. This song truly represents what Terra Australis (in my mind, at least) is all about. "Melbourne Black Metal Terror" indeed!
Posted by Vagabond at 11:40 PM