Cancer Spreading – The Age of Desolation 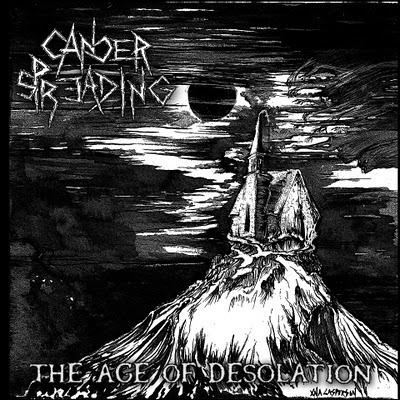 Cancer Spreading is a crust punk/stenchcore group from Italy who combine influences such as Amebix, Deviated Instinct, Axegrinder and death metal titans Bolt Thrower to create an absolutely crushing mix of crust and death metal.

The guitar and bass tones plus the vocals have much more in common with death metal than crust. The guitars and bass crush and pummel like Bolt Thrower’s early albums and the vocalist wouldn’t sound out of place if he were to front an OSDM band. The song structures, however, are more akin to Axegrinder and early Amebix; dark, heavy and slow with the occasional fast section to change things up a bit. Mixing these kinds of tones and songwriting technique allows the band to evoke a real crushing and powerful atmosphere, fitting of the lyrics which focus on misanthropy and hopelessness, which sets them apart from the standard death metal and crust punk bands out there.

I can’t really choose a stand out track here as the album flows really well and even the cover of the classic Bolt Thrower song “Cenotaph” fits in. Overall this is a consistently killer record that I would highly recommend checking out if you’re a crusty or a metal head. Cancer Spreading combines the best elements of crusty stenchcore and old-school death metal flawlessly.

I think other web-site proprietors should take this web site as an model, very clean and magnificent user friendly style and design, let alone the content. You are an expert in this topic!
La Canadienne Women's Felicia Boot