War Master – Pyramid of the Necropolis 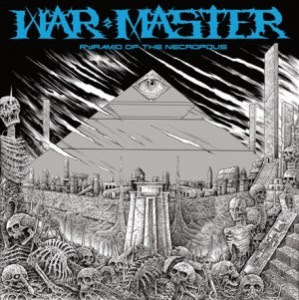 War Master is a death metal group from Texas consisting of members of Insect Warfare, Nibiru, Dissent and Blaspherian. Their style is best described as straight up Bolt Thrower worship done right. They’ve been around since 2009 and put out two demos and a single so far. “Pyramid of the Necropolis” is their debut full length.

Everything about this album screams “Bolt Thrower worship!!!”, from the low end guitar and bass tone to the mid-range vocals, powerful drumming and mid-paced groovy riffage to the occasional burst of all out blasting grindcore chaos. While War Master’s demos focused more on the punkier side of BT worship, “Pyramid…” concentrates more on mid-paced groove and riffs with plenty of headbanging moments spread throughout.

The whole “worship” metal thing is really cheesey and fucking annoying and over-saturated at times, but bands like War Master, who know what they’re doing and don’t directly rip off other songs and just make the sound their own are living proof that you can worship your heroes without coming across as an over-hyped fanboy trying to be cool (I’m looking at you, retrothrash!).

I never saw that you reviewed this album. I love it though. good stuff