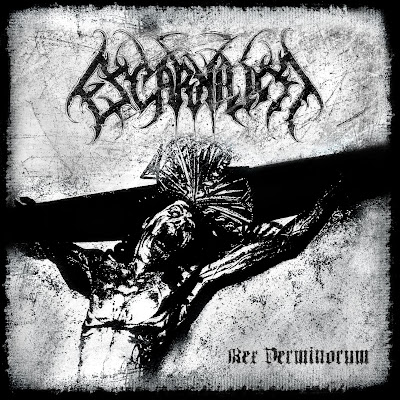 Escarnium is a 4-piece death metal outfit hailing from Brazil who have been around since 2008. To date they have released a demo, a split with Inside Hatred and “Rex Verminorum”, a three track EP with four bonus tracks which are actually the songs from their demo “Covered in Decadence”.

Escarnium’s style can be described as a mixture of both American (particularly Tampa Bay) and Swedish death metal with a bit of Brazilian barbaric flavour. Upon listening to this release you will hear elements of Morbid Angel, Grave, Vader (not Swedish, Brazilian or American, I know), Obituary, Entombed and various other acts from the two very different DM scenes. Hell, even the guitar tone comes across as mix of both styles. Escarnium make every effort to carefully follow the stands set by the early 90’s death metal legends, mixing fast paced moments with crawling slow tempos and occasionally adding blast beats. The second track “Self Proclaimed Messiah” stands out as the best new song here.

The production leaves nothing to be desired except that the solos sound a bit far off in the mix, but that’s only a minor issue that I assume will be fixed on later releases. This EP really feels like it could stand as a competent full length and really leaves me anxious to hear what this unholy Brazilian horde will do in the future.