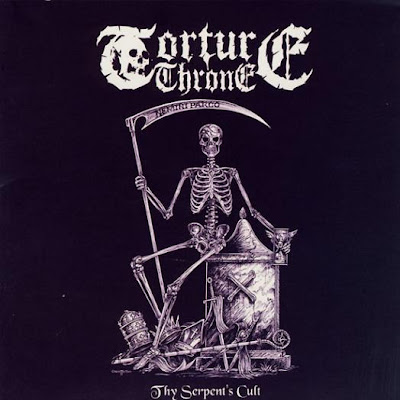 Torture Throne is a death metal band from France, of all places. They’ve been going since 2009 and “Thy Serpent’s Cult” is their only release so far. It was originally put out on the final day of 2010 but has recently been re-released on Obscure Domain Productions.

Sound-wise this is very old-school and very European, sounding somewhere in between Swedish and Finnish death metal with a bit of American influence buried within. The guitars are ball-crushingly heavy and low-tuned with a bit of melody sprinkled throughout the riffs, the bass is nice and audible (also ball-crushingly heavy) the drums are pretty high in the mix and do their job very well and the vocals are very hoarse and sound great. The songs vary from straight up Swedeath worship to crawling; almost doom metal-ish, sections and everything in between. The production is murky yet clean enough to hear everything so it fits the music just fine.

I can’t really say much more about this 20 minute EP, but I would wholeheartedly recommend it to any fan of ancient metal of death.

Support Obscure Domain Productions.
Posted by Vagabond at 1:52 AM