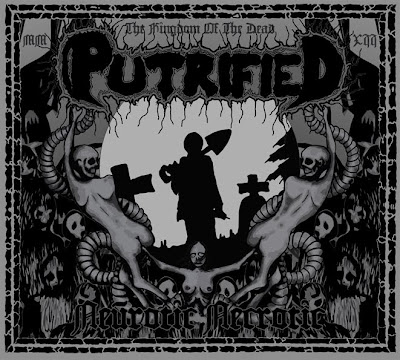 Putrified is the solo death metal project of A. Death who also plays in Swedish black metallers Infuneral. His second full length “Neurotic Necrotic” is somewhat of a concept album which centres around a man who hears voices that he can’t stop. In his attempts to make the voices stop, he begins to dig up graves where he thinks the voices come from. In the end he ends up injecting these corpses with fluids to make them come alive and shenanigans ensue. The story is very loosely based on a couple of Lovecraftian tales.

Now, on to the music itself. The record is very well mixed and has a clear production where you can hear everything without being overly clean. The guitar tone is very early 90’s Swedeath, bass is quite audible as well. The drums have a presence and do their job just fine. The tempos vary from straightforward Swedish death metal stompers to mid-paced grooves and at times get a bit doomy. There is a lot of focus on groove and catchy riffs, so it’s a pretty “rocking” album and the songs flow very well together, tying in with the concept.

I’ve not much else to say about “Neurotic Necrotic”, but if you dig old-school Swedish death and want something else to put in your player, get your hands on this.

Soon to be released on Hellthrasher Productions. Support this killer up and coming label!
Posted by Vagabond at 12:37 AM