Antediluvian - Through the Cervix of Hawaah

Antediluvian is a three (originally two) piece from Canada, who a play dark, primitive and cryptic hybrid of black and death metal. They’ve been going since 2006 and have put out a couple of demos and EP’s plus one split and one compilation album. “Through the Cervix of Hawaah” is their debut full length. 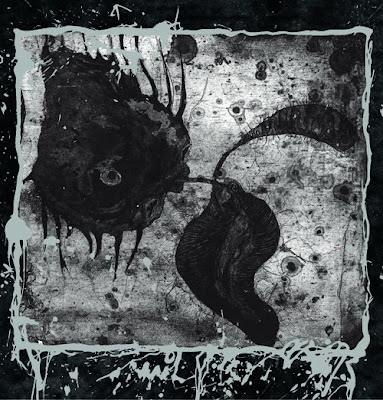 At first glance, Antediluvian may come across as a typical war metal band with cryptic death metal tendencies, which would make sense given the members’ collective musical resumes, but upon deeper listening you will find that this band is so much more than that. There is absolutely nothing conventional or predictable about how Antediluvian structure their songs; trying to find a catchy head banging section or sing along is useless. The production makes the album sound as if it was recorded deep within a long forgotten cavern in some remote area inaccessible by conventional transport and ignored by human kind.

The tones and the mix are utilized together to bring forth the most absolutely skull crushing sound possible. This really is not the kind of album you use to get your young child into heavy metal. Again, I want to call attention to the unpredictability of the song structures, which is made even more so with the tones and production used here.

I’m going to flat-out not even try to find stand-out tracks, as this is an album that needs to be appreciated in full, no other experience will satisfy the listener appropriately. All I have to say is that this was one of the greatest albums of 2011 and after giving it the appropriate amount of listening it merits, I can see why there’s been so much hype surrounding it.