Venenum is a death metal band from Germany featuring members of Delirium Tremens, Hellish Crossfire and short lived yet absolutely killer death metal horde Excoriate. They’ve been around since 2008 and dropped their self-titled demo in April 2011. Now, in early 2012 they are re-releasing it as an EP with a re-vamped production job, new artwork and apparently (I didn’t hear the demo) a few extra tid-bits added to the music. 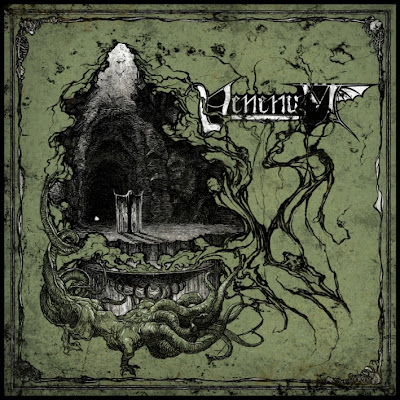 This band really is a mixed bag sound-wise. You’ll find slow and eerie chords mixed in with a bit of Autopsy-worship, then some acoustic interludes, a whole heap of almost black metal-like atmosphere, then some doomy Asphyx-esque passages and lastly, a bit of Tampa DM a la early Morbid Angel chucked in for good measure. Yeah… a VERY mixed bag, but they make it work!

The main thing that has to be mentioned when discussing Venenum is the atmosphere they invoke with their song structures, at times it feels like I’m listening to a (good) black metal album when the riffs go into an almost trance-inducing structure, then I’m banging my head along to some good ol’ fashion ripping metal of death!

The guitar tone is pretty unique and really works to bring out the dark and eerie sound. The drums are quite audible in the mix and drive things along perfectly. Bass is audible and works well with the other instruments. The vocals are sort of mid-range and wouldn’t sound out of place in a thrash metal band either (at times they remind me of Luke from Hellbringer if he sang in a DM band).

What else is there to say? Well, if you’d like to get a decent glimpse of their sound before ordering the CD, I would suggest looking up the third track “Crown of Reversion” as it has a bit of everything mentioned in this review and is the best track on the EP. Get it into ya, death fiends!