Magnetron is a thrash metal band from the Netherlands who have been around since 1996 (starting as a grindcore band before evolving into a thrash metal band), but for whatever reason, have only put out a bunch of demos until November 2011 when they finally unleashed their debut album “A Measured Timeframe” upon the world… 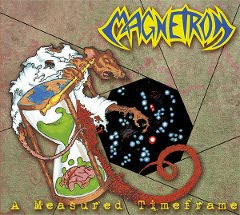 Musically, “A Measured Timeframe” is a pretty straightforward and in your face affair, sounding like a cross between American and Germanic thrash metal, but the band still injects their own flavour and sense of humour, no doubt relics left over from their grind days which give a certain charm to Magnetron. Throughout, you will find cool riffs spread between interesting mid-paced passages and the odd Forbidden-esque melody. At times the writing gets a bit technical, but not to the point of wankery, and the band clearly knows when NOT to show off, they know they’re good musicians who can pull off a bit of wankage, but they realize there is such thing as TOO MUCH WANKERY and thus, pull it off rather well.

The songs themselves are pretty much straight-up thrash but there’s enough variety to keep even the most “bored of thrash” metal fan (such as myself) entertained. The opening track “Nice Teeth”, the anthemic “Born Witless”, the title track, and the hilarious “Rob a Bank, Buy a Tank” are probably the most stand-out tracks for me, but each song has its moments and I don’t find myself feeling the urge to skip through any of them.

All in all, Magnetron serve to prove that thrash can be fun without being excessively dumb and old-school without directly ripping off their heroes.