Sectesy is a death metal band from the Czech Republic whose members have played in various metal bands in the past. This is their promo CD from 2011, obviously. 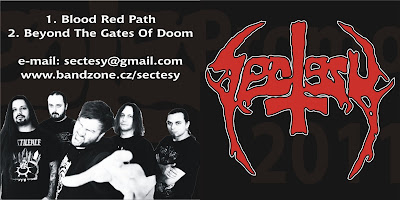 Musically, these guys know how to make good death metal. Take a bit of Incantation and a bit of Autopsy, throw them together and you get the base sound Sectesy are going for on this two track promo.

These guys definitely have the songwriting skills and instrumental chops to make excellent death metal, although, to me, it falls flat a bit; the production is extremely clean, which in my opinion doesn’t work well for this kind of death metal and lets the band down a lot. My other issue is the guitar tone, which sounds more like something befitting of a traditional/speed metal-ish band. All complaints aside, the two songs themselves are great and show plenty of potential… hopefully Sectesy will tweak out the kinks before their next release.