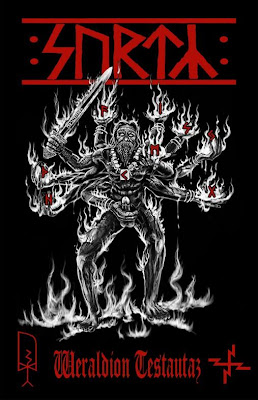 This is the first public release from a band of Dark Germanic Heathens hailing from Sweden, branding themselves as Surtr. Although it is fairly different compared to stuff released by other hordes all united in dedication to invoking the resurrection of the primordial void.

I won't say who their influences are, but judging from the white picture/red text, Moyen-esque art direction on the tape's cover, I would say Blasphemy and Beherit are possible influences. The demo's very sound only adds to my assumption of that, which I'll try to detail here:

What we have here is under 15 minutes of raw and punishing old-school black metal (you could call it "bestial blackdeath" or maybe even "war metal" if you wanted to; they work at least). If you're looking for atmosphere, melody or even the usual raw black metal sound of bands in this similar art direction, look elsewhere. The drums are violently struck, not played. The guitar riffs are at least "musical"; not fingered in such speed to create a wall of fuzzy noise to bring up any indication of Blasphemy/Beherit worship (it's about the only element which would only make me wonder if such bands are an influence, not immediately conclude that they are). Yes, it is a rehearsal demo, but the clear coherance of the drums being bashed, very well played guitar riffage and overall murky darkness over the two make up the recording's own atmosphere.

As for the vocals.. well they're my favourite part of the entire demo. They are far from your standard black metal shrieks, nor are they even any form of death metal (that I've heard beforehand) to compensate for the forementioned oldschool death/black metal elements.
In fact, I'm not hearing vocals suited for metal. I'm hearing the carnal warcries and commands of the Black One himself (or maybe even just any other rampant Norse beast in favor of him, eager to bash the visage of a Valkyrie open with a bludgeoning weapon). This is what primarily makes the demo fucking amazing in my honest opinion. I have never heard vocals this inhuman before. So many bands try to pull off trying to sound like a beast of some form or another; this one pulls it off very fucking well.

I grant this amazing demo 4.5 out of 5. Only thing that stopped me from giving it a perfect score was that it's too fucking short and it left me wanting more, playing the demo more times in succession than I would for most other releases. Even another 5 minutes would've done well for it. But it hasn't dumbed down my love for it and the band itself, and if this is but a taste of what's to come in the future, then this horde has my support all the way.


SUPPORT!!
Official Myspace
Scythe of Death Productions
Posted by SPLCHRLCRNG at 12:16 AM