Backyard Mortuary - Lure of the Occult 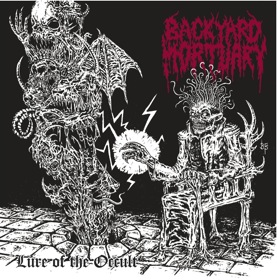 Backyard Mortuary is a death metal band from Sydney, Australia which has been around since 2002. Unfortunately, until a couple of weeks ago, they had only released two demos. I remember jizzing buckets when I got a hold of their second demo a few years ago, back when I was first getting in to underground death metal, as it was one of the better demos I looked into at the time. “Lure of the Occult” is their full length album, which was released just in time to coincide with the bands “last ever” gig at Evil Invaders IV.

The first thing you will notice when listening to Backyard Mortuary (and I think the main thing that separates them from other death metal bands) is the unique guitar sound, which would sound just as fitting in an old-school grind band as it does in Backyard Mortuary. The vocals are also worth mentioning, ranging from low gutturals to high shrieks and everything in between. The drum work is tight and changes up quite often, paving the way for some nicely varied song structures. There’s not much to be said about the bass, but the bassist fills her role rather well and I’ve nothing to complain about.

The song writing reminds me of early Autopsy; the tracks range from slow and almost doomy to all out blasting ragers with plenty of mid-paced headbanging moments in between, often within the one song.  My personal favourite tracks would probably be; “Beyond the Grave”, “Mutation”, “Diseased”, “Macabre Butchery” and one of the best album closers I’ve heard in a long time; “Demon’s Blood”… however, these preferences are subject to change, because every song is great.

It is always unfortunate to see the end of a killer band, but with “Lure of the Occult”, Backyard Mortuary has gone out with a bang and left us with one of the best death metal albums to be released thus far in 2012.

I'm not sure what you mean by the last paragraph. This band is active and hasn't 'gone out' with anything.

I was told that the gig I saw them at the other week was their last ever show. Where are you getting your information from?