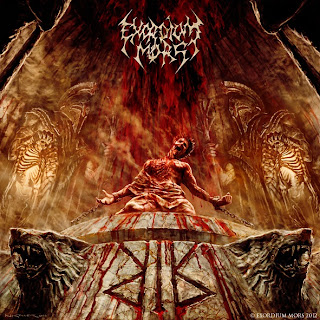 Exordium Mors is a band from New Zealand who feature strong elements of black and thrash metal with a smidge of death metal in their music. They’ve been around since 2004 and put out a few demos and an EP. I met one of their members at Evil Invaders and he passed their latest promo along to me. “Sacrifice, Perish and Demise” features a few older songs and a Venom cover.

The first thought that came to mind when I listened to this promo was “this sounds like Absu sharing a flock of sheep with Impiety”, but after a few more listens I came to realize Exordium Mors have their own sound, rooted deeply in the black, thrash and death metal bands that influenced the aforementioned chaotic hordes. These guys meld blazing twisted riffs, sizzling solos, fist pumping choruses and a bestial attitude with a certain sense of restrained technicality that allows each musician to show off the hours of practice they have clearly put into learning their instruments.

Of the three originals featured here, “Ancestors Call” is my personal favourite, however; “Exordium Mors” is a close follower and there’s nothing wrong with “Sign of Judas Liege”, either. Hell, even the cover of “Black Metal” is executed well and suits the bands style. So, in short; if you like chaotic and bestial black thrash with dueling guitars a la Slayer/Priest played by very skilled musicians, Exordium Mors should be right up your alley.

Watch out for these kiwis in the future, as they’re hoping to have an album out later this year!