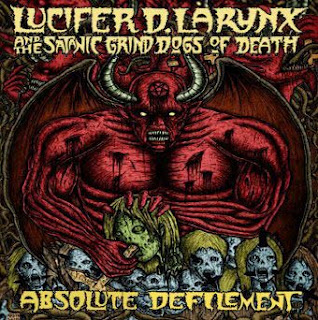 Lucifer D. Larynx and the Satanic Grind Dogs of Death (henceforth referred to as LDL because fuck typing that again) is a grindcore band that originally formed some time during the 90’s and has put out a couple of demos, a split with Aussie grindsters The Kill and a self-titled EP. “Absolute Defilement” is their debut full length, which finally saw the light of day in April this year.

LDL play old-school grind in the most straightforward sense of the word. The main influences being the obvious suspects; early Napalm Death, early Brutal Truth, early Terrorizer, Repulsion and so on.  Pretty much every track starts off with a sample intro leading into a short and to the point song featuring catchy riffs, blasting drums that tend to worship Sandoval’s work on the first Terrorizer album, incoherent low growled vocals mixed up with some high pitched shrieks… all in all, rather stock standard grindcore fare.

Basically, if you’re into old-school grind; you’ll dig this album, if you’re not, then it’s not going to change your opinion. There really isn’t much to be said about this type of music. LDL take an old and overdone formula, put their own spin on it and manage to play it well enough to stand above the legions of boring grind bands out there. These guys have done a top job and "Absolute Defilement" is a fine example of everything I like about grind.