It’s not often that I’ll go out of my way to review an obscure two song demo that’s been available for nearly two years, but, when I came across Kingdom of Decay on BandCamp last week, I was really impressed with this demo and have been listening to it a shit load. 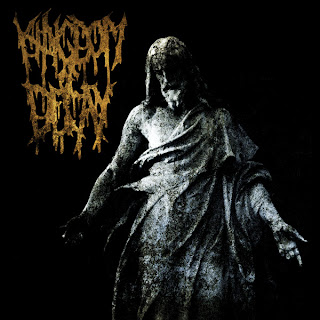 Kingdom of Decay is a death/doom metal band from Darwin. They’ve been around since 2005 and have only released this demo, with a new release coming later in 2012. Their sound can best be described as “funeral” death/doom, taking influence from bands such as; Mournful Congregation, diSEMBOWELMENT, Winter, Agalloch, Evoken and the like.

The mood is rather hefty and depressing, with themes focusing on the end of the world with all religion crumbing and a new society rebuilding around the worship of a Sun God, or something to that effect. The music is generally slow, but, occasionally picks up the pace with the occasional slow-mid pace moment peaking through. The vocals are gruff and death metal-ish, guitar tone is what I’d expect for this type of music; simply crushing, the bass is there doing its thing in the background and the drums just plod along, driving forth this lumbering mammoth.

I really can’t go into much more detail about a two song demo, but if funeral doom or death/doom is your bag then check out Kingdom of Decay. I’ll be waiting for that new EP!

Demo available for free download at BandCamp.
Posted by Vagabond at 11:11 PM