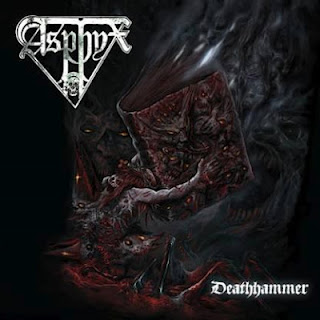 The Dutch have always brought forth quality death metal with bands such as Sinister, Pentacle, Pestilence, Xenomorph, Creepmime, Thanatos and resident metal legends; Asphyx. Any death metal fan worth their salt knows who Asphyx are and most likely owns a few of their albums, as these guys have been around since the very beginning and consistently pumped out killer material for 25 years running. “Deathhammer” is their latest in a long line of classic albums.

One thing that you can never fault Asphyx for is playing boring music; these masters of death metal have always mixed their brand of death metal up with a variety of influences ranging from old-school thrash riffs to funeral doom-esque dirges. It’s this variety of influences that got me into their music in the first place, because it’s always refreshing to hear a death metal band that doesn’t really sound like any other. As is the way of these Dutch tyrants, the songs range from blistering pounders such as the title track to the extremely slow “Minefield”, continuingly proving that Asphyx is not a one-trick pony.

The audio quality on “Deathhammer” is rather impressive and still holds a nice old-school touch that so many older bands newer albums are lacking. The bass is really audible but is overtaken by the drums in faster parts, but due to the great mixing job you can tell this was done on purpose. Martin Van Drunen fails to disappoint and does a killer vocal job as per usual. The guitars are everything you could want from an Asphyx release and showcase a familiar tone.

To make a long story short; “Deathhammer” sounds like an Asphyx album and Asphyx still sound like Asphyx. Some of the better tracks include; the title track, “Minefield”, “Der Landser” and “We Doom You to Death”. All in all; a totally solid album that should sit well in any die hard death metal fans collection.