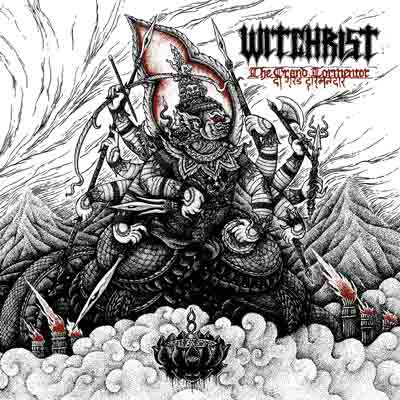 “The Grand Tormentor”, by New Zealand death metal act Witchrist, is an album that I have been waiting for since being obsessed with their debut, “Beheaded Ouroboros” when it came out back in 2010.

“The Grand Tormentor” does not disappoint; it’s absolutely crushing and shrouded in a thick and grainy production that strives to add a certain feeling of oppression to the music. From the opening track to the end of these 50 minutes of utter primeval devastation, you are absorbed in the abysmal depths of totally disgusting and evil death metal.

While this record sounds murky and dark, much in the style of their earlier work, all of the instruments actually come across surprisingly clear, which may be a negative for some listeners, but in my opinion, it actually serves things rather well. The songwriting is rather brilliant, with major variations in track length and tempos, with some songs being short and sharp while others may plod along for nearly 10 minutes. Regardless of the variation; this album still flows well and sounds as if everything was placed where it is for a reason; not just thrown together in hopes of randomly finding some consistency.

Although “The Grand Tormentor” is a pretty long album, I’ve yet to find myself losing interest for even a second throughout its 50 minute run time. This, along with the new Ignivomous, Wrathprayer and Pseudogod albums, is a must own and another one to add to the list of absolutely suffocating and crushing death metal releases of 2012.