Hellvetron - Death Scroll of Seven Hells and Its Infernal Majesties 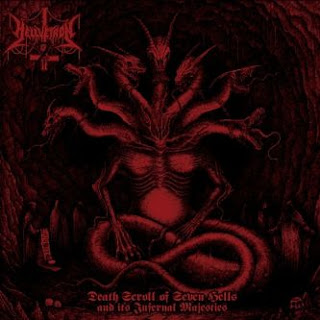 Hellvetron, a black metal band from Texas, seem to have snuck up on everyone; having been around since 2004 but only releasing one demo in 2005 before dropping “Death Scroll of Seven Hells and It's Infernal Majesties” on Hells Headbangers back in April.

Now, when I say Hellvetron are a black metal band, I really mean that in the loosest sense of the word. A more accurate way to describe them would be if you took a band like Teitanblood and forced them to make a record after listening exclusively to doom metal for a few years. Ominous slab-dragging beats plod along beneath a raw and filthy guitar tone which fittingly accentuates the primordial and drawling chord-driven riffs. Front man Alal'Xhaasztur sounds like he is howling out proclamations throughout the very depths of the Seven Hells, preaching to the legions of the damned. Haunting chants and various other subtle effects are used rather generously where they can in order to draw the listener even further into the abysmal depths of horror that Hellvetron spawned from.

“Death Scroll…” is a very short album, clocking in at only 25 minutes, but, surprisingly this works as an advantage, as one often associates this style of music with long, drawn out “compositions” that tend to wear thin on the listener pretty quickly, since not everybody has time to sit down and listen to music for upwards of an hour every time. Hells Headbangers has once again delivered us the goods with this release.
Posted by Vagabond at 8:28 PM