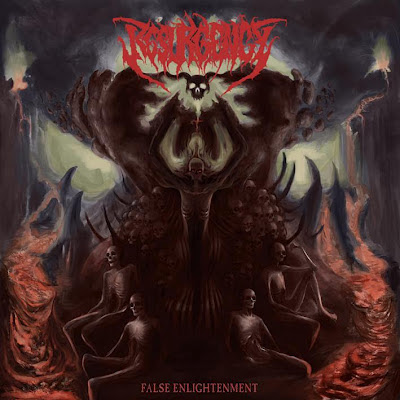 Some of you readers may remember my review from way back in December of a killer split between two new death metal bands; Desolator, from Sweden and Greek deathbangers Resurgency. Since then, Desolator haven’t released anything new (to my knowledge), but Resurgency, on the other hand, have recently put out their debut album on Hellthrasher Productions (the same label who did the split).

In my review of the split, I mentioned that Resurgency came across as heavily influenced by Morbid Angel, Sinister and Vader. This still rings true on “False Enlightenment”, however, the band is starting to find their sound now, as one can tell from the re-recorded versions of “Where Despair Dominates”, “Dark Revival” and “Psychosis”, all three of which have seen reasonable improvement here. The band sounds a lot tighter and more energetic then they did on the demo, too.

The production is pretty standard mixing for this type of death metal, but it works well with Resurgency’s particular style and I’ve no real complaints about it. The songs are all well written and varied enough, you can tell that each riff has been carefully selected and placed, the fast, neck snapping sections evenly spread between mid-paced grooves, slower sections and the occasional sweeping melodic passage, so as not to overwhelm the listener with unrelenting brutality.

If you consider yourself a death metal connoisseur, then you should definitely pick this up. Once again Hellthrasher Productions has delivered the goods.