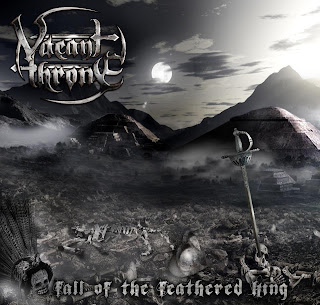 Colorado seems like an odd place for metal, it's not really in a central location like Los Angeles, New York, or even Tampa Bay, but sometimes good things come out from the little niches of the Earth. Colorado's power metallers, Vacant Throne, are releasing their debut Fall of the Feathered King later this summer on August 4, 2012. This five-piece band are showing their colors and in full force.

Concept albums are usually hit or miss, usually we leave it up to Rush or Queensryche to do the job. However, I think there are definitely some exceptions. Fall of the Feathered King is a concept album about the Spanish conquest of the Aztecs in the 16th century. Oh, my inner-historian is just giddy about hearing songs of Spanish steel clashing with Aztec, two great civilizations going at it. History aside, the album really does tell the story well.

Each song seems to have been painstakingly written. The riffs really flow together, making the five-plus minutes songs seem shorter than usual. The solos, brought to you by Josh Mortensen, nice and melodic, little songs in their own right really. They aren't going 200 mph and shredding balls, but they're noodley and melodic which is a bit of a rarity in many power metal bands. Jason Mortensen, the vocalist, really brings the vocals to life. He reminds me of Kiske and a little bit of the guy from Angel Witch (the name escapes me, forgive me!). "Burning Skies" and "Genocide" showcase his vocals, the former has some nice high pitched wailing and the second has good high harmonies.

The instrumentation is also fantastic. They put in Native American-esque flutes on "Harsh Empire", it's a little atonal and drives my ears a little mad, but it's a nifty little touch for the theme. (Spanish guitar would have been nice too). The songs remind of early Jag Panzer with some Helloween thrown in; "Burning Skies" is a good example, as well as "Jaguar Knight". The album is dark and foreboding, and yet it's upbeat and a little on the "epic" side of things. There's a whole slew of tracks that are great. John Yelland from Prog/power metal, Disforia, guests on "Genocide" with a ripping solo.

A really solid album. Definitely worth checking out, especially if you like 80s-style power metal like yours truly. I'm definitely on the waiting list for a second album.