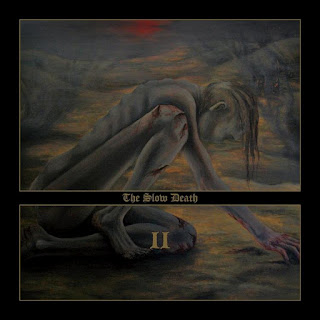 After four years, Sydney based death/funeral/doom metal band The Slow Death has returned with their second full length offering, simply titled “II”. This is a concept album, as was their first (which was based on the Bubonic Plague), focusing on the story of the last humans on Earth, who are forced to slowly die of hunger and exhaustion as they struggle survive in a never-ending desert wasteland.

Their sound can best be described as very slow-paced and depressing death/doom with both female and male vocals, in parts melodic and aggressive in other parts. The female vocals, provided by Mandy Andresen, tend to take the lead with Gregg Williamson’s growls showing up for a few verses in each song (as best evidenced in “To Your Fate”, which is also my favourite song on “II”). Mandy’s vocals take a rather depressing mid-range tone, as oppose to the more angelic and operatic vocals she provided on the first album, while Gregg’s vocals are very evil and sinister sounding. The actual music rarely picks up in pace and definitely lives up to being doom metal without dragging things out and boring the listener, which is great because the album runs for over an hour! The guitars are heavy and crushing, with a tasteful keyboard element to complement the riffs. The drumming, provided by Yonn (Nazxul, Backyard Mortuary, Temple Nightside and more) is pretty much what you would expect from this type of doom, plodding along with the riffs and driving the listener towards the realms of despair.

The production may be too “clean” for some people, but I feel it’s necessary to bring out everything the songs have to offer. A messy and raw recording just would not do at all as far as I’m concerned. Each individual instrumental part and vocal line can be heard with excellent clarity, which allows each band member to shine without favouring any particular instrument in the mix.

I would recommend picking this, and their first, album up if you’re into well-written doom metal that depresses just as much as it crushes.
Posted by Vagabond at 9:32 PM