Innsmouth and Mongrel’s Cross are two Australian bands who haven’t put out too much since their respective inceptions, with each band having only released a demo tape and a 7” EP before this split, although Mongrel’s Cross has since put out their first full length. 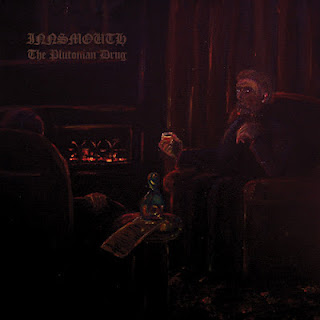 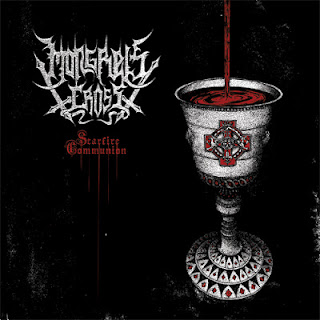 Innsmouth has the first side of this split, with their new song “The Plutonian Drug”. People who are familiar with their previous releases, “The Departure of Shub-Niggurath” and “She-Goat” should have a rough idea of what to expect from this offering; almost seven minutes of mid-paced death metal with raw production, some of the most sinister vocals I’ve heard, HP Lovecraft inspired lyrics, catchy guitar and bass work and solid drumming.

The Mongrel’s Cross song, “Starfire Communion”, sounds like this missing link between “Whoresanna” and their recently released album “The Sins of Aquarius”. On this track they have fused the raw and rough black/thrash sound of their earlier work with the more “epic”, death metal influenced sound they are going for now. There’s still a bit of Motörhead riffage and “barking” vocals going on here, but also a more epic and melodic feel to how the guitar is played, I’m not quite sure to describe it, but those who have heard the album will know what I’m talking about.

Both bands have delivered one of their best songs on this split 7” and I would strongly recommend that fans pick it up, as well as people who haven’t gotten around to hearing either band yet.