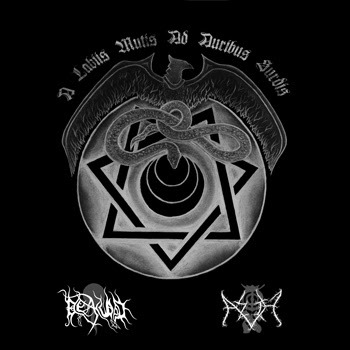 What we have here is a split between two black metal projects from Sydney; Bleakwood which is a solo project of Dan Nahum who also covers drum duties in Azoth and has his fingers in many other bands.

On their side of the split, Azoth presents a new version of the track “Babalon”, which was originally featured on their self-titled 2010 demo. The song is a six minute epic which features shifting riffs and varied tempo changes. The same “atmospheric black metal with a heavy focus on riffs” vibe, evidenced on their previous effort, is still there and the song has been changed a great deal, having been shorted by 10 seconds, mixed better and tweaked into a better-rounded track. The main focal point, as I pointed out before, is the guitar work, which alternates between chainsaw-buzzfukk messy riffs and more refined and standard black metal tremlos. The bass pretty much follows suit, occasionally rearing its ugly head for a quick fill. The drumming is relentless and precise, driving things along without compromise. It is clear that Azoth has slightly changed direction here and I’ll be interested to hear anything they put out in the near future.

Bleakwood has been around a bit longer than Azoth, having been formed way back in 2002, yet this is only their third release following a 2008 demo and an EP entitled “Blood & Faith” released in 2010. Bleakwood’s songwriting style is pretty unique and complex, ranging from chaotic passages that remind me of bands like Axis of Advance and Order From Chaos to more calm and catchy moments that showcase the interesting guitar work and tastefully subtle synths. The music is unpredictable, militant and aggressive. Not much has changed since their previous EP, but the project has evolved enough to keep my interest.