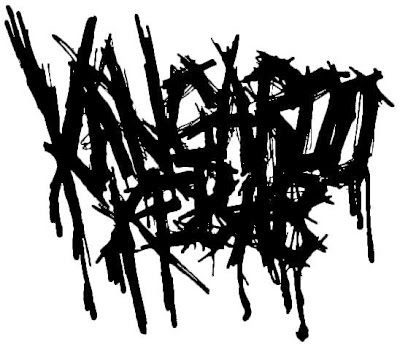 Witching Metal: G’day Irie, let’s start this interview off with a bit of info about your band, Kangaroo Kebab. Who is in the band and how was the band formed? Have you cunts recorded anything yet?

Irie: G'day Mate, well there's Tex Houdini on vocals, Heaps Gay Ray on surf guitar, Jerry B. Goode on Drums and myself on grind guitar. We formed because this shit band called Electric Flu was playing a house show at Jerry's and we wanted to form an even shitter band so me, Jerry and the 2 cunts from Electric Flu got together and raped every ones ears for 10 minutes and they fucking loved it. We have 2 demo's, a self titled one which is awful and I suggest you not listen to it and the legit best band EP which I reckon is actually fucking good, the boys complained about only being able to hear my guitar in the mix, but that's why it's so fucking good.

WM: Why did you choose to name the band Kangaroo Kebab? Is Ray really heaps gay?

Irie: Jerry thought of it, like a while back when Kangaroo Kebab was just us but nothing happened because none of us could sing (or even shout or scream), Jerry reckons its the ultimate statement because bogans also eat kebabs, he hates me because I'm a bogan but he steals my beers. Ray is extremely gay, hence the name, it's no secret that Ray is an out Lesbian, everyone knows this.

WM: What are Kangaroo Kebabs influences, both musical and non-musical?

Irie: Well Tex and Chris fap over Royal Headache, The Minutemen, Michael Crafter (shout out to Dave and his beard), Jerry is full on into Hardcore Punk and Powerviolence and other stuff but mainly those two genres. I don't know whether to put grindcore into musical or non musical but I fucking love grindcore, bands like The Kill, Fuck...I'm Dead, Captain Cleanoff, Garbage Guts, Wormrot, Insect Warfare, Blood, O.L.D, Terrorizer, Repulsion, Discordance Axis etc. Non Musical would be Kangaroo's, the beach, surfing, Dave’s from Michael Crafter beard, Kmart Girls, Carlton United Brewery…

WM: I understand you’ve played a couple of gigs so far. Were you guys actually good, or totally shithouse? What can people expect from a Kangaroo Kebab show? 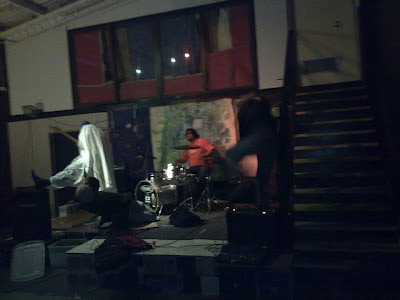 Irie: Yeah we were fucking awesome for most of them, especially the last one at Blackwire records with Clowns from Melbourne where even chicks had a mosh, and Tex accidentally hit some girly in the face! There was even a pile up during the end, heaps good show. I suppose the shows we did at The Valve supporting Jurassic Penguin and at Spaceport One supporting Ghosts, Goonbag Colostomy and Goon Soaked Rag (those bands fucking rule btw, shout outs!) were a tiny bit good, I totally got carried away at the Spaceport One gig and totally raped the stairs and probably left seamen stains on ‘em, the chick who runs it was none so happy People can expect to be covered in blood and beer at our shows, watch out for Tex, he's fucking scary, I heard he even yells "Oi Cunt" out to pedestrians.

WM: Would you fuck a Kangaroo if you were drunk enough and it bought you a kebab?

Irie: Yeah, but it would have to buy me a slab of VB as well and after it bought me a Kebab I’d probably kill it and turn it into heaps of kebabs.

WM: Is that the concept for Kangaroo Kebab's debut album entitled "Irie's a Filthy Animal Fucker"?

Irie: Yeah?...nah, its called "Wayde is walking AIDS and shits himself on a daily basis", that's a fucking concept if I ever heard one.

WM: I may shit myself but your mum cleans it up…

So, what’s next for Kangaroo Kebab, do you have plans to put anything new out and/or play more gigs? Where can people get in contact to obtain your terrible demo material if they actually want to waste time listening to it?

Irie: Yeah we got this split coming up with two sick bands, not saying who they are yet, but it'll be fucking sick. We won’t be playing any gigs until November, Tex is busy yelling Oi Cunt at Pedestrians in Europe and Heaps Gay Ray is also going to Europe soon to meet cute boys. Both demo's you can listen to here, and you can download them for free, unless you want to send in some money so I don't have to get a job.

WM: Normally this is the part where I would thank you for the interview, but then, it dawned on me that you are a cunt and I hate you. Any last words, you cunt?

Irie: You fucking bum lover, I hate you too, this interview was a waste of time, you're gay, next thing you put down your throat wont be a pie, it'll be Heaps Gay Ray's dick. Thanks to all the band's we have played with, all the venues we've played in and anyone else who has helped us play a show. Also thanks to any body who has seen us and laughed, cried, moshed, mic grabbed, got hurt or shat themselves to our brand of Surf Grind. Kangaroo Kebab loves you all!!! 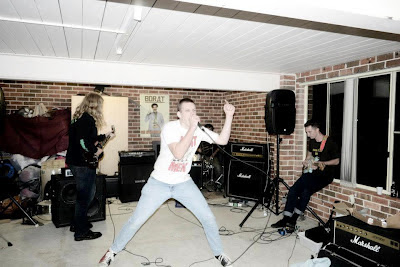 Note: Witching Metal does not support or suggest you listen to this band. This interview was only done to pay Irie (A.K.A. the "hands on hips guy") back for the killer hand job he gave me in a pub dunny last month.