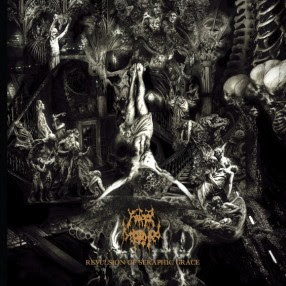 Incantation worship has become a bit of a “trend” in recent years and a lot of people seem to be getting pretty tired of it. Personally, I prefer it over the “Swedeath revival” and have found a reasonable amount of releases in this style that have become part of my ever-growing collection. Just recently, I picked up Father Befouleds first album, “Obscurus Nex Cultus”, which I enjoyed immensely. A few days later, I learned of their new LP, “Revulsion of Seraphic Grace”, which was released a month ago on Dark Descent Records.

Featuring members of Prosanctus Inferi and Encoffination among others, Father Befouled manage to conjure the best elements of the early Incantation sound while managing to sound unique in a scene of imitators, but (to me at least), they sound somewhat fresh and have developed their own style.

The atmosphere that Father Befouled evoke is not only achieved by the crushing music, but also by the production which can be simply described as murky, dark, oppressive and drenched in sickness. The vocals sound really close, as if the singer is standing behind you and whispering unholy invocations in your ear. The guitar tone is pretty typical of this style, but also has a similar bass-heavy feel to Profanatica’s work, thus separating them from the herd of Incantation worshippers in another way.

The music itself is very dense, alternating from suffocating slow dirges that may cause the listener to feel a sense of unease, to faster moments that conjure a real sense of urgency and refuse to let the listener catch their breath. The way that Father Befouled alternate between two very different types of atmosphere left me, at times, wondering what to expect, and as such reminded me of the Australian band Impetuous Ritual at times.

If you’re not yet sick and tired of the revolting formula that is commonly referred to as “Incantation worship” and are looking for a band that does it well enough to stand out from the crowd, you would be silly not to add “Revulsion of Seraphic Grace” to your next order from Dark Descent.