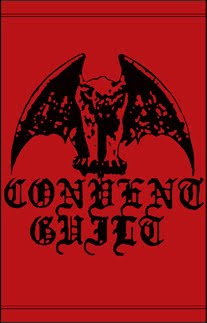 Spawned from of the ashes of Sydney death/thrash band Shackles, Convent Guilt play a dark and obscure brand of old-school traditional heavy metal that is severely lacking in the current Australian metal scene.


From the opening riff of the self-titled track, you get a pretty good idea of what Convent Guilt are all about; traditional and rocking old-school metal that is catchier than your mothers’ herpes. The guitar work is pretty bluesy and has just the right amount of melody to keep things interesting, the bass isn’t very audible but it has a presence, especially in the intro to the fourth and final track “Killer Virgins”, the drumming is competent and drives things along at a good pace.

Each of the four songs sound distinct from each other, with “No Dawn in Lucifer’s Light” being the stand-out track with its extremely catchy chorus and hard-hitting mid-paced riffs, this is actually the song that caught my attention the most when I saw the band live at Evil Invaders.

Alongside Johnny Touch, Demons Gate and Doomed Beast, Convent Guilt is another killer Australian heavy metal band worth setting your sights on.

Available through Abysmal Sounds, one of Australia's best labels!